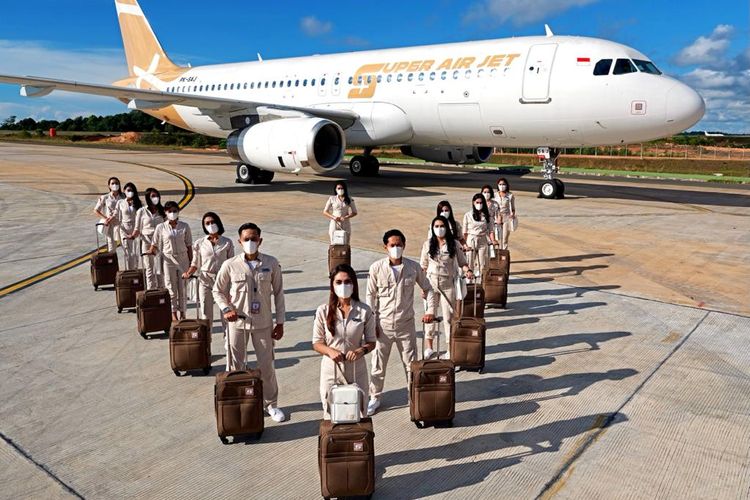 JAKARTA, KOMPAS.com - The pandemic has stymied plans for some airlines to take off. However, in the face of Covid-19 and its impact on travel, a new Indonesian airline Super Air Jet is set to launch its first flight soon in Indonesia.

Super Air Jet's chief executive officer Ari Azhari explained that currently, his office is preparing to go through various stages and procedures required. The new airline is preparing for its inaugural flight soon.

"Super Air Jet was founded based on optimism that market opportunities, especially the need for domestic flights, still exist and are wide open. Demand for air travel is coming back quickly, especially from the Millennials,” Ari said about the new airline's upcoming launch in a statement on Monday, May 3.

According to him, air transportation is much needed in Indonesia due to its geographical condition as an archipelago country. The establishment of the new airline, he continued, is also in line with interregional connectivity.

"Super Air Jet is established to cater to the needs of many passengers in tourism, education, and business," said Ari, who previously served as the general manager of Lion Air Group.

Ari further added that the main focus of Super Air Jet is to offer a low-fare concept with occasional excursions into the mid-market sphere. He hoped low fares will spur demand on routes other airlines do not serve.

It also focuses on direct flights between cities on a point-to-point basis in the domestic market and later expand to international routes since international arrivals in Indonesia remain at a virtual standstill. Recovery of that sector will take longer than Indonesia’s domestic airline sector.

"In the early stages, Super Air Jet will operate a new generation fleet, namely the Airbus 320-200 with a capacity of 180 economy class seats," Ari stated.

The airline is banking on…

Covid-19 Transmission Under Control in Early...
Comments
There are no comments
Comment wisely and responsibly. Comments are entirely the responsibility of the commentator as regulated in the ITE Law
Thank You! We have received your report. We will remove comments that conflict with the Community Guidelines and the ITE Law.