Lihat Foto
Workers from the KASBI Labor Association fire multicolored smoke bombs and flares to signify the end of May Day protests on Saturday (1/5/2021).(Kompas.com/Sonya Teresa) 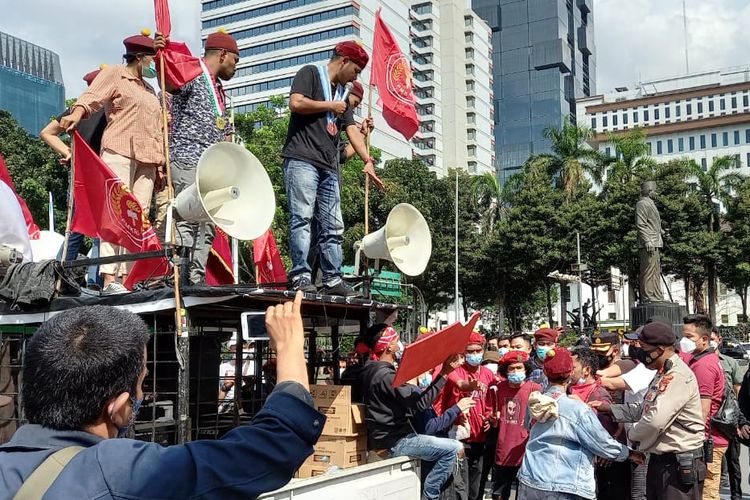 JAKARTA, KOMPAS.com – Police in Jakarta kept the peace during May Day demonstrations by labor organizations, as they arrested individuals intent on stirring up the occasion

The Indonesian Chamber of Commerce and Investment is set to introduce the Gotong Royong Vaccine Drive, less than a week before its official start on May 11.

And officials at Soekarno-Hatta International Airport drew up extra procedures to ensure that travelers from overseas get quarantined, after a number of inbound Indonesian and Indian nationals evaded quarantine. This and more on Indonesia Highlights:

The Jakarta Metropolitan Police has nabbed dozens of demonstrations during May Day protests in the capital on Saturday, May 1, which largely went peacefully.

“We strongly suspect the detainees are Anarko members, which are known to stir up trouble. We detained them before they can join the laborers. of detaining them first.” Yusri added that another 15 people were nabbed in front of the US Embassy after they did not have permit to hold protests.

“They were planning to cause more unrest by burning a tire, which [the police] managed to confiscate in time.” The labor protesters spoke out against the Omnibus Jobs Creation Law, which was passed in October 2020 amid great controversy.