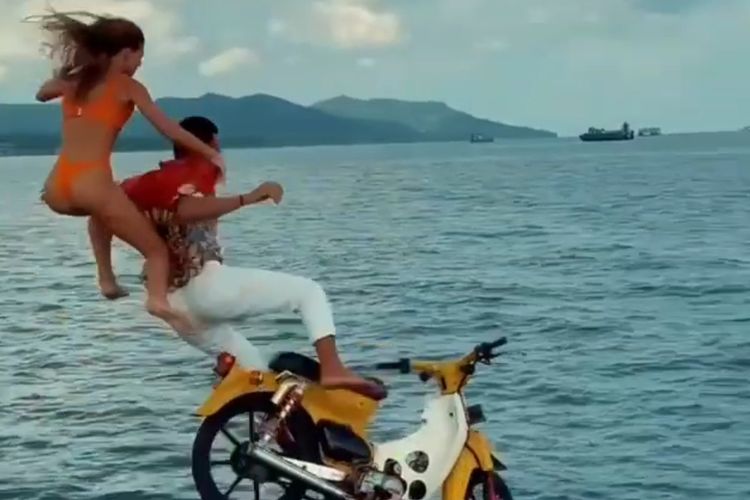 KARANGASEM, KOMPAS.com – The Indonesian National Police’s Bali Regional Police might have seen more than their fair share of foreign tourists committing crimes and other infractions on the resort island.

But police in the Balinese regency of Karangasem literally saw the depths that overseas visitors can go as they investigated two foreign tourists who pulled off and recorded a stunt that went viral on social media.

The footage showed an unidentified foreign man, with the woman riding behind him, revving a yellow Honda C70 motorcycle at the docks before speeding the vehicle headlong into the sea.

“Fortunately, they jumped from the motorcycle and survived the fall. The footage was not just caught on smartphone; it was also recorded in drones.” She added that investigators also suspected a third party recorded the incident.

Suartini also noted that the police questioned some witnesses, among them harbor security.

“The security personnel assumed the tourists wanted to take pictures and let them in. The poor English spoken by both sides hampered communication and aggravated the misunderstanding.”

Suartini pointed out that the foreigners and their accomplices fished out the motorcycle and gave it to fishermen witnessing the incident. But the fishermen did not enjoy their new motorbike for long.

“Investigators took the motorbike as…

“Work from Bali” to Save Tourism...
BUSINESS