Lihat Foto
Police show the suspect who issued death threats to the police on social media, in a press conference in Jakarta on Monday, (14/12/2020)(Tangkapan layar YouTube Kompas TV) 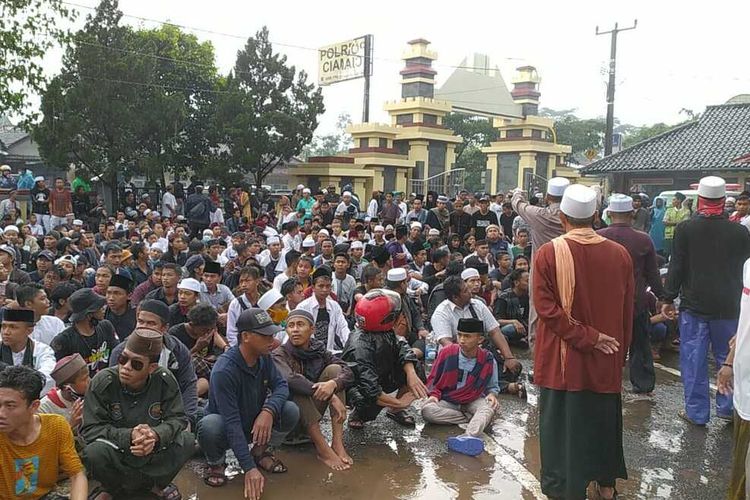 The Jakarta Metropolitan Police questioned a youth identified as Muhammad Umar on Monday, December 14, a day arresting him for threatening the police on social media.

“[Muhammad Umar] uploaded a video on social media where he threatened to behead a policeman if we arrested Rizieq. We were tipped off by netizens who were alarmed by its content,” said Jakarta Metropolitan Police spokesman Chief Police Commissioner Yusri Yunus.

“Umar admitted to recording and uploading the video because he was a fan of Rizieq. But we cannot determine any other motives as he repeatedly apologized and regretted his bad judgment [in making the video].”

Yusri added that investigators are still trying to determine his motives.

Meanwhile, dozens of FPI members in the city of Tangerang, Banten Province came to police stations across Tangerang on Monday, December 14, among them a station in the Pasar Kemis area, to express their solidarity with Rizieq and demand that they be jailed as well.

“The crowd request that they be detained because they also took part in FPI gatherings at Petamburan, Central Jakarta, that were the main reasons that Rizieq is behind bars,” said Tangerang Police Precinct head Chief Police Commissioner Ade Ary.

“They also called on the police to release [Rizieq] and clear the charges against him.”

FPI members in the town…