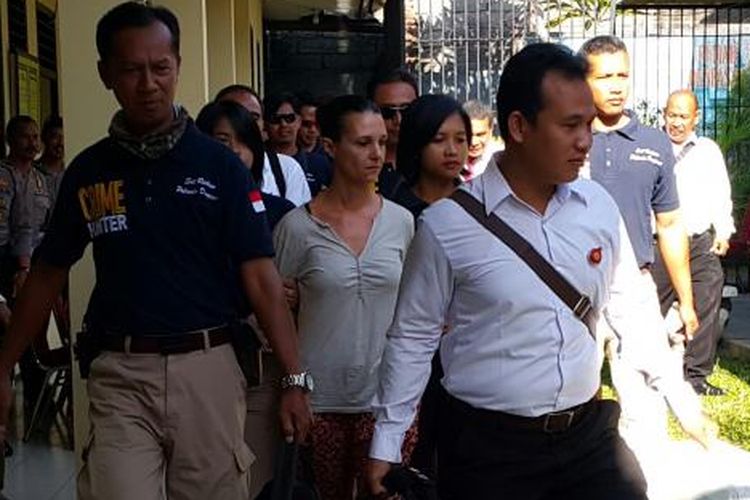 Lihat Foto
Sara Connor following her arrest for the murder of Indonesian police I Wayan Sudarsa in 2016(KOMPAS.com/SRI LESTARI) DENPASAR, KOMPAS.com – Officials in the Indonesian resort island of Bali have released Sara Connor, the Australian woman jailed for her complicity in the death of Indonesian policeman I Wayan Sudarsa in 2016.

“She is currently detained at the Ngurah Rai immigration center pending her deportation to Australia. We do not know how long she will be there, as there have not been any flights heading there.”

The head of the women’s wing of Kerobokan Penitentiary, Lili, confirmed the 49-year-old’s early release.

A district court in Denpasar, Bali convicted Connor and her British boyfriend David Taylor in March 2017 after they were found guilty of beating Wayan to death in August 2016. Presiding judge I Made Pasek sentenced the two to five and six years behind bars, respectively.

During their trial, Taylor, alias DJ Nutzo, admitted getting into a fight with Wayan on Kuta beach in the small hours of August 17, 2016, after he accused the latter of stealing Connor's handbag. He also admitted hitting Wayan with a beer bottle. But he maintained he acted in self-defense, and that he was unaware that Wayan was a policeman. He added that the victim also pulled Connor’s hair during the late-night fracas.

According to Agence France Presse, the mother of two maintained her innocence during the trial on grounds that she tried to break up the fight. The court rejected her claim.

Prosecutors at the trial refused to convict them of murder because they did not intend to kill the officer.

The pair fled the scene of the crime but left vital evidence such as Connor's driving license and ATM card.

Connor and Taylor turned themselves in to the police after the latter launched a manhunt for the two. The case received intense media coverage in Australia and Indonesia.