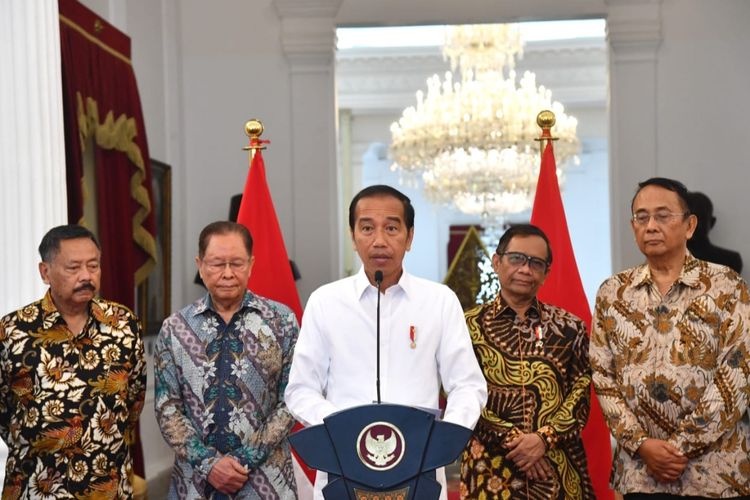 Lihat Foto
Indonesian President Joko Widodo speaks to a press conference after receiving officials who are tasked with Non-judicial Settlements of Human Rights Violations (PPHAM) at the State Palace in the capital Jakarta on Wednesday, January 11, 2023. (Dok. Sekretariat Presiden)

JAKARTA, KOMPAS.com - Indonesian President Joko “Jokowi” Widodo on Wednesday, Jan. 11, expressed regret over mass human rights violations committed in the country's past, including a violent anti-communist purge in the 1960s and the disappearance of student protesters in the late 1990s.

More than half a million leftists were massacred across the Southeast Asian nation in the mid-1960s, a bloody spectacle that ushered in the long rule of dictator Suharto, whose fervent anti-communist stance remains decades on.

The killings led to the collapse of the now-banned Indonesian Communist Party (PKI), once among the biggest in the world behind those of China and the Soviet Union.

"With a clear mind and a sincere heart, I as the leader of this country, admit that gross human rights violations have happened in several incidents and I regret they happened very much," Jokowi said in a speech at the state palace in the capital Jakarta.

"I have sympathy and empathy for the victims and their families."

He said the government was trying to "rehabilitate" the victims' rights "without negating the judicial resolution", without specifying how it would do that.

The president also mentioned the murder and abduction of dozens of student protesters and activists during mass street rallies in 1998 that brought down the three-decade dictatorship of Suharto.

The Indonesian leader went on to list 10 other violations that took place between the 1960s and the early 2000s before he rose to power, based on the findings of a commission he ordered to investigate the violations last year.

He acknowledged rights abuses in the restive easternmost province of Papua, including a 2003 army and police operation that left dozens of civilians dead and where officers were accused of murder, torture and abduction.