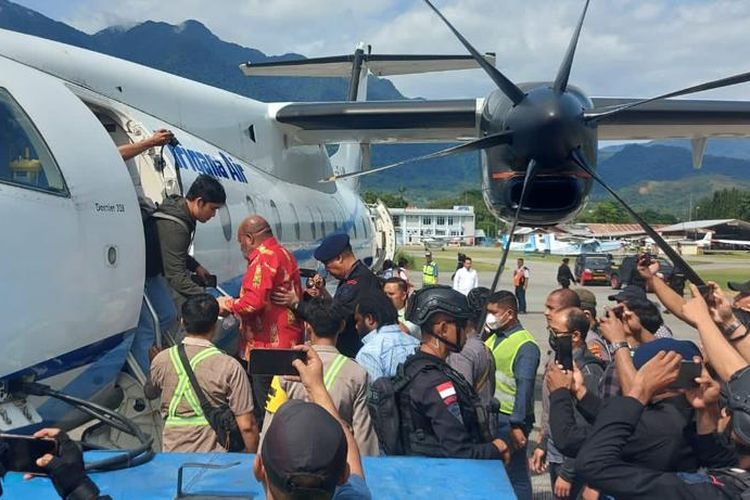 JAKARTA, KOMPAS.com – Papua Governor Lukas Enembe, who has been named a suspect in a graft case, was brought to the capital Jakarta by airplane from the Sentani Airport in Jayapura on Tuesday, Jan. 10, according to his lawyer.

Earlier, Enembe was arrested by members of Indonesia’s Corruption Eradication Commission (KPK) and police in a Jayapura restaurant at about 11:00 a.m. local time.

“He already [flew to Jakarta]. I am now at the airport,” Aloysius Renwarin, a member of Enembe’s legal team, told Kompas.com in a phone conversation.

Aloysius did not further explain Enembe’s health condition. Previously, Enembe failed to show up two times when the KPK summoned him for a probe, citing health reasons.

According to a photo received by Kompas.com, Enembe was taken to a plane at the airport and guarded by armed police's elite Mobile Brigade (Brimob) members. Besides, the tactical vehicle was also seen at the airport.

The arrest was also confirmed by Papua Police Chief Inspector General Mathius D. Fakhiri. When he was contacted, Fakhiri said that Enembe was also brought to the local Brimob headquarters before leaving for Jakarta.

“He was brought to the airport,” Fakhiri said.

Enembe allegedly received one billion rupiahs ($64,271) worth of gratuity. Following his status as a suspect since Sept. 5 last year, he was banned from leaving the country. A number of his bank accounts with a total amount of 71 billion rupiahs ($4.5 million) have been suspended by the Financial Transaction Report and Analysis Centre (PPATK) due to suspicious transactions.