Lihat Foto
Malaysia's Prime Minister Anwar Ibrahim (right) inspects the guard of honor upon his arrival at the Bogor Presidential Palace in West Java, near the capital Jakarta on Monday, January 9, 2023. Anwar was accompanied by President Joko Widodo. (YouTube.com/Sekretariat Presiden) 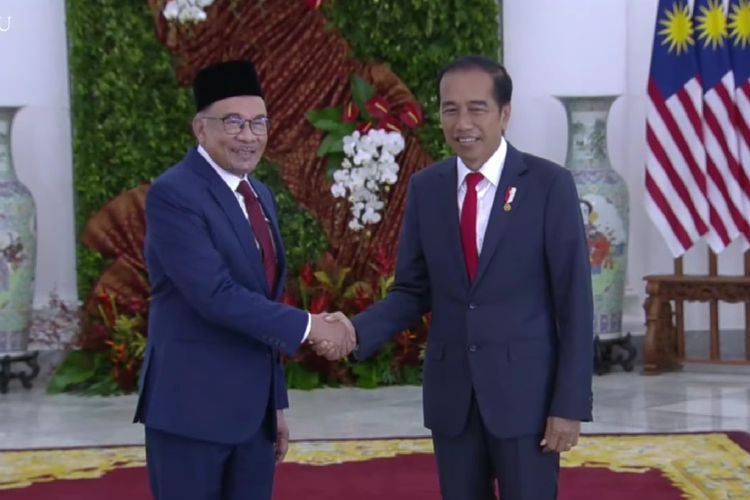 Anwar Ibrahim, a long-time opposition leader, was sworn in as the country's 10th prime minister on Nov. 24, 2022, to head a unity government in a shaky alliance with the graft-tainted party of his former political rivals.

He met Indonesian President Joko Widodo for talks at a presidential palace in Bogor, south of the capital Jakarta where he thanked his counterpart for his support after the election.

"This is a bit personal, Mr. President. When I was in a difficult situation, living in uncertainty and suffering, Indonesia welcomed me as a true friend," he said after the meeting.

Widodo said the world's two biggest exporters of palm oil would boost cooperation on the commodity and work together to battle "discrimination" against the sector, which environmentalists say is stoking deforestation in both countries. YouTube.com/Sekretariat Presiden Indonesia's President Joko Widodo (right) and Malaysia's Prime Minister Anwar Ibrahim (left) shake hand before the pair held a meeting at the Bogor Presidential Palace near Jakarta on Monday, January 9, 2023. Anwar is on his two-day state visit to Indonesia, the first foreign trip after he was sworn in as the country's 10th prime minister on November 24, 2022.

"We have agreed to strengthen the cooperation through the Council of Palm Oil Producing Countries (CPOPC) to increase the palm oil market," he said.

The Indonesian leader also lauded the interest of Malaysian companies in investing in the country's new capital Nusantara, which is scheduled to open on the island of Borneo next year.

Ahead of the talks, the…