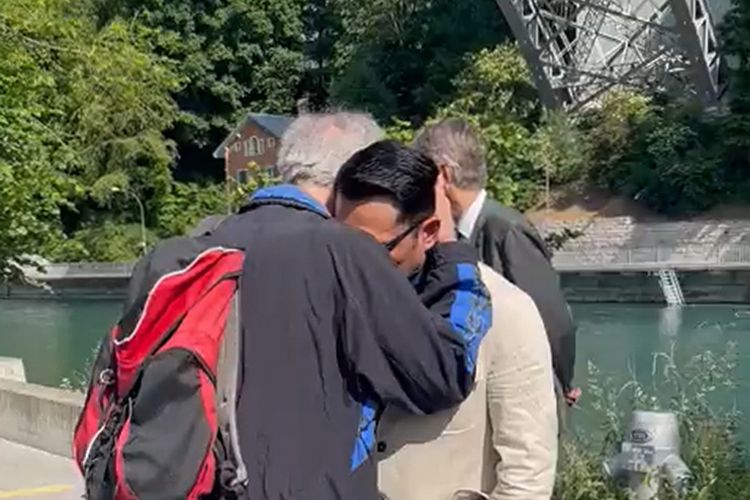 Lihat Foto
A resident of Bern, Heinrich (left), hugs West Java Governor Ridwan Kamil (right) to make him feel comfortable during the search effort of his oldest son Emmeril Khan Mumtaz who went missing during a swim in the Aare River on Thursday, May 26, 2022. (KBRI Bern)

KOMPAS.com – Swiss authorities continue to search for the oldest son of West Java Governor Ridwan Kamil, Emmeril “Eril” Kahn Mumtadz, who went missing on May 26 during a morning swim in the Aare River in the capital of Switzerland.

Head of Protocol of the Department of Foreign Affairs of the Swiss Confederation Ambassador Beatrice Schaer met with Ridwan Kamil and his wife Atalia, according to the Indonesian Foreign Ministry website. Also present was Indonesia’s Ambassador to Switzerland Muliaman Hadad.

Ambassador Schaer reiterated the Swiss government’s support in the search effort, saying the governor’s son was the main priority of the search.

She said that the Swiss Department of Foreign Affairs has communicated closely with the Bern Police and monitored the search efforts.

Relevant government agencies have intensified the search involving land patrol, boats and drones. Operations concentrated in the area near Marzili, Engehalde sluices, and the Schwellenmaetelli as well as Wohlensee.

Ridwan Kamil and his wife Atalia continued to monitor some potential locations along the Aare River.

The search efforts involved the police search and rescue team, maritime police, fire department, and the city of Bern.

Many people pour words of encouragement for the family. East Java Governor Khofifah Indar Parawansa posted on her Instagram account @khofifah.ip, “Hopefully, Emmeril Khan Mumtadz, the eldest son of the Governor of West Java Ridwan Kamil, can be found soon, safe and healthy so he can reunite with his family. Amen.”