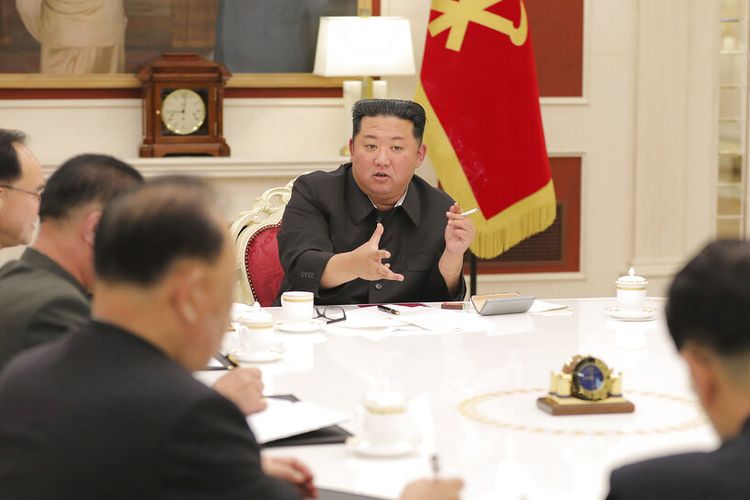 Lihat Foto
In this photo provided by the North Korean government, North Korean leader Kim Jong Un, center, attends a meeting of ruling party Workers' Labor Party of Korea in Pyongyang, North Korea Tuesday, May 17, 2022. North Korea on Wednesday, May 18, reported 232,880 new cases of fever and another six deaths as leader Kim Jong Un accused officials of 'immaturity' and 'slackness' in handling the escalating Covid-19 outbreak ravaging across the unvaccinated nation. Independent journalists were not given access to cover the event depicted in this image distributed by the North Korean government. The content of this image is as provided and cannot be independently verified. Korean language watermark on image as provided by source reads: KCNA which is the abbreviation for Korean Central News Agency. (Korean Central News Agency/Korea News Service via AP, File)(AP)

KOMPAS.com - The World Health Organization on Wednesday, June 1, cast doubt on North Korea’s claims of progress in the fight against a coronavirus outbreak in the reclusive East Asian nation.

Michael Ryan, the head of the emergency program at the WHO, said they “assume the situation is getting worse, not better.”

But Ryan said they were not “in a position to make an adequate risk assessment of the situation on the ground” since they didn’t “have access to the necessary data.”

Pyongyang has also never directly confirmed the number of people who have tested positive for Covid-19, worrying experts about the actual scale of the problem.

The WHO added it was working with the country’s neighbors South Korea and China to get an actual picture of the state of affairs and that it continues to offer support with vaccines. The North is not known to have vaccinated its 25 million people.

North Korea locked down after…