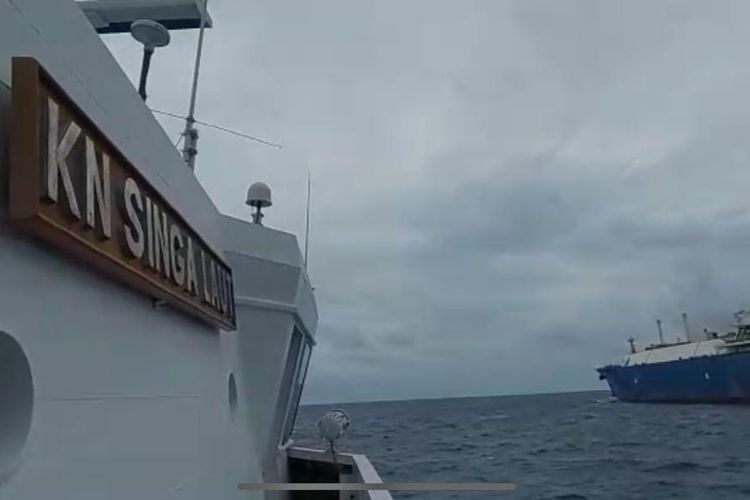 The warning came after the agency’s command and control center spotted the vessel entering the Indonesian Exclusive Economic Zone (EEZ).

The MT MGD ship entered the Maluku waters in changing directions. "Upon receiving the information, the patrol vessel in Maluku waters KN Singa Laut-402 immediately approached the target ship to inspect the MT MGD," said a spokesperson for the Bakamla Colonel Wisnu Pramandita in a statement Saturday, April 17.

At 08:00 local time, KN Singa Laut-402 managed to detect the ship's presence with a speed of 4.7 knots. Commander of KN Singa Laut-402 Lieutenant Colonel Hermawan then ordered an approach of up to 200 yards to carry out further checks by radio communication.

The MT MGD carries out sea passage from China to Australia. However, it was seen that the vessel’s bow was not suitable for its purpose and was loitering in Maluku waters. The crew said it was because they adjusted the time of arrival in Australia.

However, said Wisnu, these activities further aroused suspicion because they had the potential to disrupt shipping traffic. The KN Singa Laut-402 firmly ordered the ship to change its direction to the south and immediately sailed towards Australia without stopping or circling.

"The Bakamla’s command and control center continuously monitors the movement of the ship until it leaves the Maluku waters and enters Australia waters,” he said.

Twin Giant Panda Cubs Born at...
Comments
There are no comments
Comment wisely and responsibly. Comments are entirely the responsibility of the commentator as regulated in the ITE Law
Thank You! We have received your report. We will remove comments that conflict with the Community Guidelines and the ITE Law.