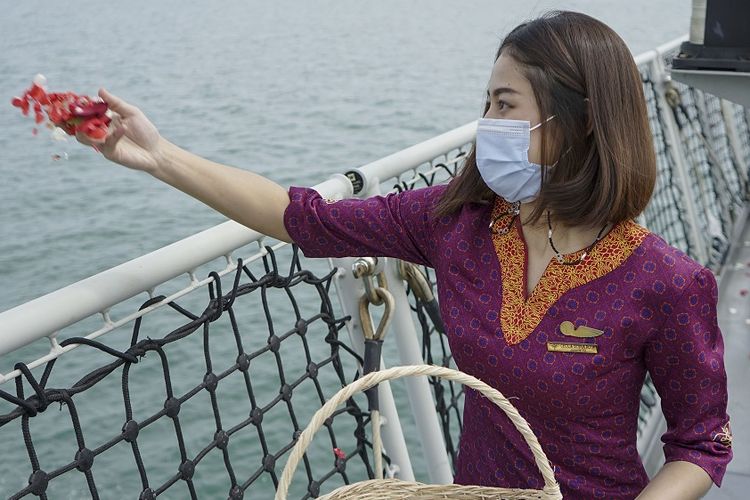 Lihat Foto
A Sriwijaya Air stewardess on board the Indonesian Navy ship KRI Semarang-594 lays flowers in the sea to mourn the dead on Sriwijaya Air SJ182 on Friday (22/1/2021). Sriwijaya Air Flight SJ182 plummeted to the sea near the Thousand Islands off Jakarta on Saturday, (9/1/2021). ANTARA FOTO/Yadi Ahmad/MRH/hp.(ANTARA FOTO/YADI AHMAD)

JAKARTA, KOMPAS.com – The Indonesian Ministry of Transportation’s National Committee for Transportation Safety or KNKT has released its preliminary report on the Sriwijaya Air Flight SJ182 disaster, more than a month after the plane went down off Jakarta on January 9.

In his report, KNKT Sub-Committee Investigations Head for Airline Disasters Captain Nurcahyo Utomo said the Flight Data Recorder [FDR] from the Boeing 737-500 flown by the low-cost carrier showed that it has problems with its engine auto-throttles.

The problem occurred minutes after taking off from Jakarta’s Soekarno-Hatta International Airport.

“Sriwijaya Air Flight SJ182 started to show problems at 8,150 feet. At that height, the throttle for the left engine started reversing,” stated Captain Nurcahyo during the press conference for the preliminary report on Wednesday, February 10.

“The issues with the throttle reduced thrust from the engine, while the thrust for the right [engine] continued to [function normally]. The problem worsened at 10,600 feet, causing the 737-500 to turn to the left.”

He added that air traffic controllers or ATC at Soekarno-Hatta initially urged the airline to ascend to 11 thousand feet to get out of the path of another airline.

“The ATC urged [Flight SJ182] to go up to [11 thousand feet] before advising them to go further to 13 thousand feet to avoid other airliners, to which the pilot replied [in the affirmative]. This turned out to be the last communication from Flight SJ182,” noted Nurcahyo.

“However, the plane never reached that height, as it started to plummet at 10,900 feet.”