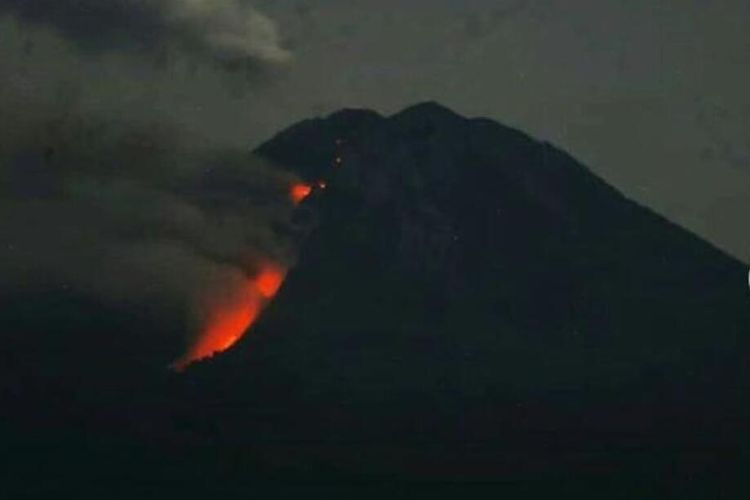 KOMPAS.com – Mount Semeru in East Java, Indonesia have just become the third volcano to experience increased activity over the past few days, after Mount Merapi in Java and Mount Ile Lewotolok in East Nusa Tenggara.

“We have closed the hiking trails on Mount Semeru as of today, after we detected increased volcanic activity in the form of flowing hot lava” said Acting East Java Regional Management Disaster Authority [BPBD] head Agus Budi Santoso to the Antara state news agency on 30 November.

"The findings were confirmed by lookouts on nearby Mount Sawur who first detected the lava flow on Saturday, 28 November.”

BPBD head for the Lumajang Regency Wawan Hadi Siswoyo reiterated Agus. “The flow of hot lava on Mount Semeru has occurred for at least 13 times. They flowed between 500 to one thousand meters from the rim of the volcano,” he noted.

The intensifying activity on Mount Semeru did not deter all public facilities, like Abdulrahman Saleh Airport in Malang, East Java, from operating.

“The volcanic activity has not affected the airport, as it did not disrupt flights. However, we are constantly monitoring developments of Mount Semeru and Mount Bromo” said Suharno, an official from the airport.

“[The airport] has contingency plans to deal with natural disasters. Operations are still continuing as normal, including health protocols such as checking passengers’ body temperatures with thermal scanners or sinks to wash their hands.”

Volcanic eruptions occur regularly in Indonesia alongside earthquakes and tsunamis. The country is located in the ‘Ring of Fire, an area in the Pacific Ocean basin where that is vulnerable to these natural disasters.