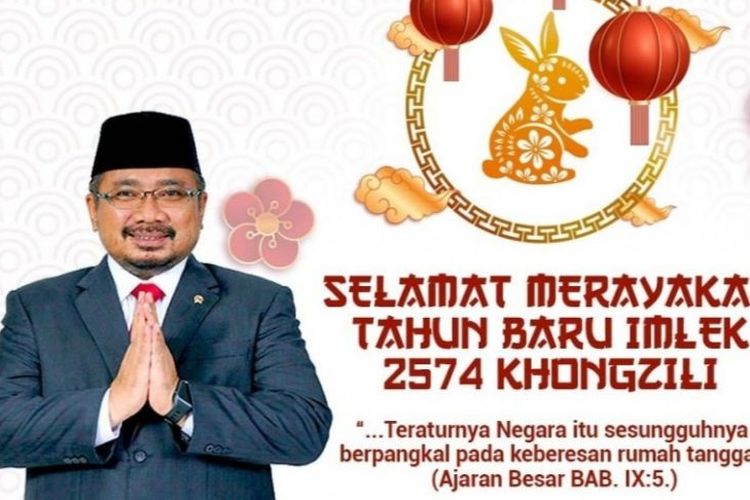 JAKARTA, KOMPAS.com – Indonesian President Joko “Jokowi” Widodo and some cabinet ministers extended their good wishes to the Chinese community in the country over the weekend.

Chinese New Year is observed as a public holiday in Indonesia, the world’s largest Muslim-majority country. The government declared Monday, Jan. 23 as a collective leave day in addition to the Chinese New Year festival on Sunday, Jan. 22.

Jokowi conveyed his greetings on the @jokowi Twitter handle, hoping that tomorrow will be better for all.

"Time changes, the year passes, and new challenges appear, but one that must remain is the hope that tomorrow will be happier, more prosperous, and more advanced. Gong xi fa cai [May you have a prosperous new year]," Jokowi wrote.

Meanwhile, Religious Affairs Minister Yaqut Cholil Qoumas said that the Chinese New Year needs to be a momentum for self-introspection to evaluate the past and improve oneself.
“Let us make the Chinese New Year as a momentum to introspect ourselves, correct our past journey, and plan the upcoming year,” Yaqut said in a statement on Sunday, Jan. 22.

The minister pointed out that Confucius had said that if people could renew themselves, then they should ensure that their renewal was continuous.

He also expressed hope that harmony could be realized to achieve an outstanding Indonesia.

"Happy Chinese New Year 2574 Kongzili. Gong he xin xi [Happy New Year], Wanshi ru yi [may everything go as wished], to all who practice the Confucian faith in Indonesia and everyone who celebrates it," the minister said.

He also conveyed the Chinese…