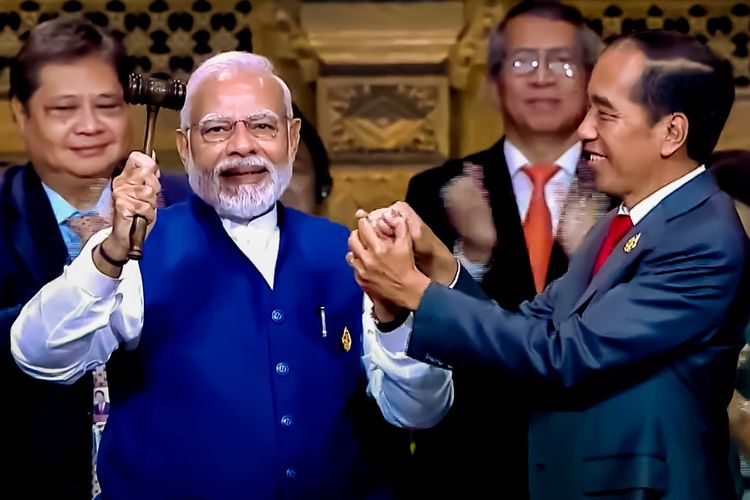 KOMPAS.com - India has taken over the leadership of the G20 – a group of well-meaning nations that are destined to guide the global economies. The mantle of this group changed hands from the second-largest democracy in Asia to the world’s largest democracy as Indonesian President Joko “Jokowi” Widodo handed over the baton to the Indian Premier Narendra Modi.

These two nations have more in common than what meets the eye, and it is only a matter of time that these two great nations will have to come together for the benefit of humanity. For a start, both Jokowi as well as Modi are impressed by Krishna. Whereas Jokowi rates Krishna as his favorite Hero, Modi quotes Bhagwat Gita as his beacon in life.

Indonesia, where the summit was recently hosted, displays its cultural proximity with India not only in the Hindu-majority province of Bali but in every institution and the most important locations. Be it the famous roundabout in central Jakarta that has Arjuna and Krishna on the chariot to most of the Universities or Government institutions that have idols of Ganesha to welcome you or the fact that the stories of Ramayana and Mahabharata are recited in common homes.

In these settings, the significance of Prime Minister Modi taking up the challenge of leading the G20 increases further. The impact of the group shall be discussed in echelons worldwide but we shall try and understand the message that Modi had for the masses in Indonesia, the Indian Diaspora, and those distractors who believe in underplaying the achievements.

In India, the opposition shouts lack of job creation and hardships due to Modified economic systems and they have their logic for such a stance but the general law-abiding public, the Indian diaspora, and the followers of India worldwide are very happy.

Indonesia as a nation would certainly be one huge population that follows India and feels the connection since the historic times, which were strengthened by the heroics of Bintang Jasa Utama awardee, the Ex CM of Orissa Shri Biju Patnaik who flew his Dakota in war zones to rescue Soekarno, the first President of Indonesia. The recent Padam Shree award to Putra Manuaba from Bali also outlines the deep relationship where Indonesians get appreciation in India.

Modi’s address to the Indian community started with a reference to the Bali Jatra festival held on the shore of Orissa almost simultaneously as his address went on to list the kite flying festivals and close cultural ties among the largest democracies of Asia. Modi’s address has given hope to the Indian Diaspora which has graduated from being foreigners in different lands to be ambassadors of the great civilization in every part of the world.

He has also given hope even to the common Indonesian living in poverty that just like India, the situation can become better with the right leadership, to the mindset impacted by Corona that India will come to its help irrespective of caste, creed, nationality, religion, or race. For a country like Indonesia where humanity overrides religious beliefs, where love overrides politics, and where respect for life is a basic essential trait, Modi’s address surely must have made a huge impact on living as one big family.