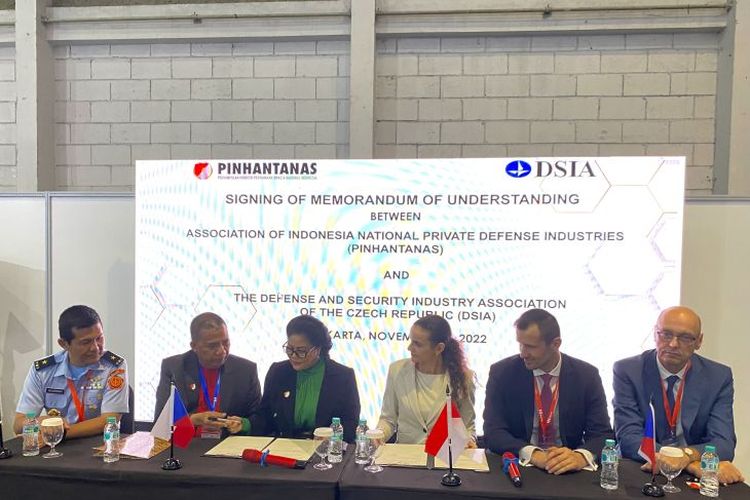 Lihat Foto
The Association of Indonesian National Private Defense Industries (Pinhantanas) and the Defense and Security Industry Association of the Czech Republic (DSIA) sign a memorandum of understanding (MoU) in Jakarta on Thursday, November 3, 2022. (ANTARA/RAKA ADJI )

JAKARTA, KOMPAS.com - The Association of Indonesian National Private Defense Industries (Pinhantanas) signed a memorandum of understanding (MoU) for cooperation in the defense industry sector with the Defense and Security Industry Association of the Czech Republic (DSIA) on Thursday, Nov. 4.

Signing on behalf of Pinhantanas was its chairperson Evi Lusviana, while representing DSIA was its deputy director Kristyna Helm. Also present was other high-ranking officials from Indonesia and the Czech Republic.

"The two countries have maintained to implement cooperation in various sectors, politics, economy, and trade as well as people-to-people contact. Cooperation in the defense sector is also well growing, including the transfer of defense technology," Lusviana said at the MoU signing at the Jakarta International Expo (JIExpo) Kemayoran.

The MoU took place during the "2022 Indo Defence Expo & Forum", hosted by the Indonesian Ministry of Defense from November 2–5, 2022.

According to Lusviana, several types of defense equipment made in the Czech Republic have been used by the Indonesian Military (TNI) for a long time.

The signing of the MoU will serve as an "umbrella" for future cooperation between the defense industries of the two countries, she said.

Meanwhile, DSIA Deputy Director Kristyna Helm said that the signing of the MoU is a beginning of a new chapter in the relationship between Indonesia and the Czech Republic.

She said the signing of the MoU between Pinhantanas and DSIA will bring further action.

During Thursday's event, the Ambassador of the Czech Republic to Indonesia Jaroslav Dolecek expressed the hope that after the signing of the MoU, there would be an implementation of cooperation.