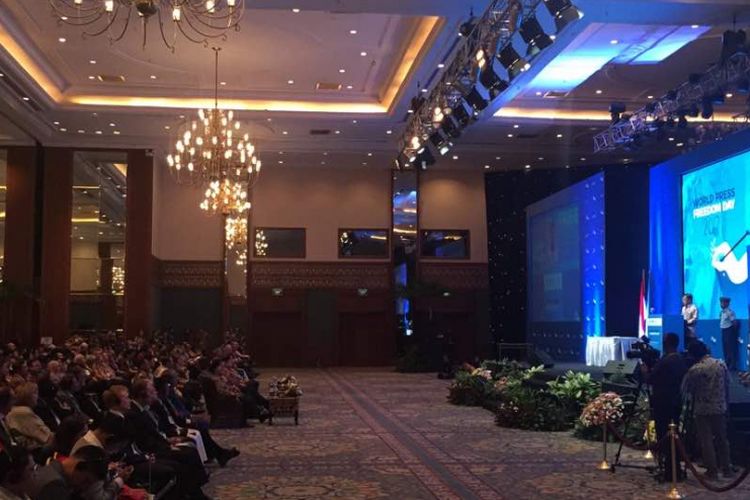 KOMPAS.com - Every week a journalist gets killed somewhere in the world because of their work. According to Reporters Without Borders (RSF), 50 journalists were murdered in 2020. People who work for the media live with this danger in many countries. And, on top of that, their killers face impunity. No one was brought to justice in 81 percent of the cases that have taken place over the past 10 years, according to the Committee to Protect Journalists (CPJ), a non-governmental organization (NGO).

These two organizations have now joined forces with the Dutch NGO Free Press Unlimited (FPU) to create a People’s Tribunal for murdered journalists in The Hague in the Netherlands. The first hearing took place on the International Day to End Impunity for Crimes Against Journalists (November 2). The location and the name of this new body were carefully chosen. The Hague is the seat of the International Criminal Court (ICC) and the tribunal was named for the Permanent People’s Tribunal, a non-judicial institution founded in the Italian city of Bologna in 1979 to investigate and bring worldwide human rights violations before a court.

Not a criminal court

In the Hague, the newly founded People’s Tribunal aims to deploy research and judicial expertise to hold those governments to an account that do not investigate crimes against journalists, according to Reporters Without Borders.

“The global problem that we want to jointly address is the impunity for murders of journalists,” RSF Executive Director Christian Mihr told DW. He added that the tribunal was not a criminal court in terms of international law but instead, its goal was to raise public awareness.

The initiative also aims to pressure those governments that top the ranks of CPJ’s Global Impunity Index, which spotlights countries where journalists are slain and their killers go free. Those states are Somalia, Syria, Iraq, South Sudan, Afghanistan, Mexico, Philippines, Brazil, Pakistan, Bangladesh, and Russia.

The symbolic hearing in the Hague will showcase three concrete cases from Sri Lanka, Mexico, and Syria: the murders of Lasantha Wickrematunge (2009), Miguel Ángel López Velasco (2011), and Nabil Al-Sharbaji (2015).

Most people will never have heard those three names before. But behind each name is an individual fate and a murder that has not been cleared up. The killing of Mexican journalist Miguel Angel Lopez Velasco is a case in point.

Lopez Velasco was a newspaper columnist at Notiver in the Mexican state of Veracruz. He wrote about organized crime, femicide, and corruption. A killer squad forced its way into his home early on June 20, 2011. Lopez Velasco, his wife, and his 21-year-old son died in a hail of more than 400 bullets fired from automatic machine guns. The perpetrators have never been brought to justice.

UN special representative for the safety of journalists?

The United Nations is another unexpected target of this initiative, Christian Mihr concedes. Reporters Without Borders has been calling for the creation of a UN special representative for the safety of journalists for a number of years now. “That, of course, is also a goal, and there are various states that support it. In 2016, the German parliament became the first in the world to support the appointment of this kind of commissioner,” says Mihr. The tribunal is, therefore, he adds, also part of our efforts at persuading the UN of the urgent need for a UN special representative. “What is missing is a standing instrument to allow investigations to be carried out internationally,” Irene Khan, the UN special rapporteur on freedom of expression confirmed in her statement at the launch of the tribunal in The Hague. However, she immediately warned that: “Setting up an independent investigatory mechanism may be complicated.” Instead, she proposed a kind of task force of experts as an interim solution. It would be made up of forensic scientists and other specialists who could call upon existing UN institutions.

Colombia as a positive example

As long as the appointment of a UN special representative for the safety of journalists is blocked by the resistance of a number of governments, the supporters of press freedom will have to be content with small victories on a regional level — victories that prove a permanent institution is in a position to remind governments of their responsibilities. The case of Colombian journalist Jineth Bedoya Lima is one very recent example.

In mid-October, the Inter-American Commission of Human Rights (CIDH) ruled that the Colombian state shared responsibility for the kidnapping, rape, and torture of the journalist in 2000. In addition, the CIDH­ declared that there had been grave omissions in the legal handling of the case. It was a resounding blow for the government of conservative President Ivan Duque. The CIDH belongs to the Organization of American States (OAS) and investigates human rights violations in the region.

The newly created tribunal against the murder of journalists will hold three hearings in the Hague between January and March 2022. The closing addresses will be held on May 3, 2022, to coincide with World Press Freedom Day. For Joel Simon, the executive director of the Committee to Protect Journalists (CPJ) the verdict is already evident: “Governments have demonstrated a lack of political will in terms of resolving these cases and the consequence is that the global flow of information is undermined, that critical journalistic information is thwarted, that badly needed journalists are murdered and the murderers of these journalists are not being brought to justice. Censorship is accomplished through murder.”

Indonesia’s Economy Grows 5.01 Percent in...
Comments
There are no comments
Comment wisely and responsibly. Comments are entirely the responsibility of the commentator as regulated in the ITE Law
Thank You! We have received your report. We will remove comments that conflict with the Community Guidelines and the ITE Law.