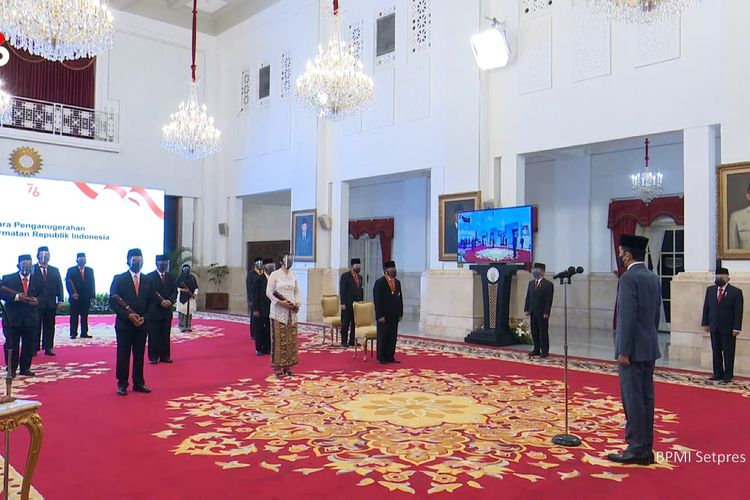 Lihat Foto
A screen grab of the presentation of honorary medals to hundreds of recipients on the occasion of the 76th anniversary of Independence Day at the State Palace on Thursday, August 12, 2021. (Kompas.com/Fitria Chusna Farisa)

JAKARTA, KOMPAS.com – Indonesia’s President Joko “Jokowi” Widodo bestowed honorary awards on 325 fallen healthcare workers who lost their lives against the Covid-19 pandemic in a ceremony at the State Palace on Thursday, August 12.

They comprised doctors, nurses, and epidemiologists. The awarding ceremony was read by the President’s Military Secretary TNI Young Marshal Tonny Harjono in a televised message.

As many as 258 Bintang Jasa Pratama medals were awarded to the fallen medical workers, including Dr. dr. Adnan Ibrahim, Sp. PD who previously served at the Community Center for Lung Health in Makassar, South Sulawesi, and Ngadiah, S.K.M, who served as a nurse in a Palembang hospital in South Sumatera.

Jokowi also presented the honorary awards to nine prominent figures and Johann G. Goldammer, a senior scientist at the Max Planck Institute for Chemistry in Germany.

The recipients were granted the honorary medals for their distinguished service to the country on the occasion of the 76th anniversary of Independence Day, which falls on August 17.