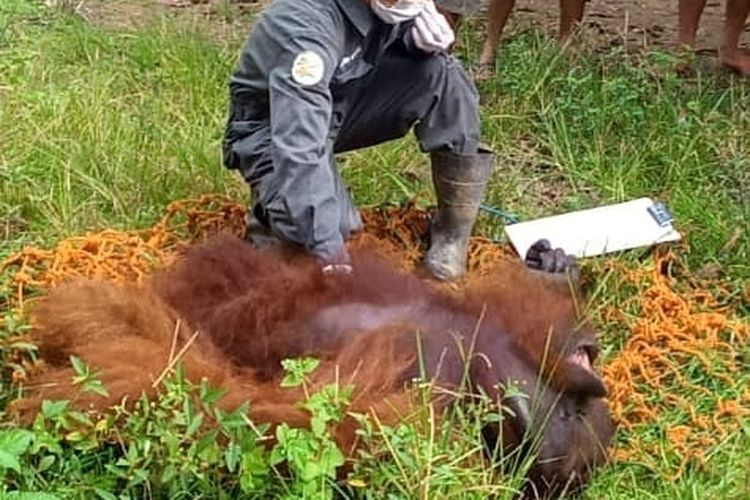 SAMARINDA, KOMPAS.com - Wildlife officials in the Indonesian province of East Kalimantan has successfully rescued an adult male orangutan who ventured into the village of Lusan, in the province's Paser Regency, last Monday.

"We have been tracking the primate for three days following his sighting, after he disappeared back into the forest," said East Kalimantan Nature Conservation Agency or BKSDA Ad Interim head Nur Patria Kurniawan to Kompas.com on Friday, June 11.

"The terrain [in the forest] was challenging, but we managed to find him," he added of the hunt for the orangutan, which involved veterinarians based in Samboja from the Borneo Orangutan Survival (BOS) Foundation, police from the Muara Komam Precinct, and villagers from Lusan.

Nur suspected that the orangutan, which is a protected species in Indonesia, used to live in a rehabilitation center before his release into the wild.

"Our hunch was first based on the ape's surprising behavior in [Lusan] village. He did not disturb the villagers, and was content with taking fruits from [the village's] orchards," he said.

"But our instincts that the orangutan underwent rehabilitation before being released into the wild has been confirmed by a microchip mark on his body."

Video footage taken of the orangutan's impromptu visit to Lusan showed that he has a very gentle disposition. He even let them flock to approach him, hold his hand and feed him.

Nur pointed out that much about the orangutan's background remains a mystery. "We still do not know what year [the orangutan] was released, nor the exact whereabouts. We are awaiting both details, as well as his identification, from BOS," Nur explained.

The orangutan has now been evacuated and taken to the BOS Rehabilitation Center in Samboja, Kutai Kertanegara Regency for a checkup before being released back into the wild.

"The orangutans likely entered villages [like Lusan] from the wild to gather fruit and vegetables, or seek water and shelter. They usually do this when they could not find these essentials in their habitat."

Orangutans are endangered in their natural environment throughout Kalimantan and Sumatra, as the rain forests that make up their habitat are cut down to make way for palm oil plantations, residential areas, and other manmade structures.

Indonesia Arrests 24 Suspected Terrorists in...
Comments
There are no comments
Comment wisely and responsibly. Comments are entirely the responsibility of the commentator as regulated in the ITE Law
Thank You! We have received your report. We will remove comments that conflict with the Community Guidelines and the ITE Law.