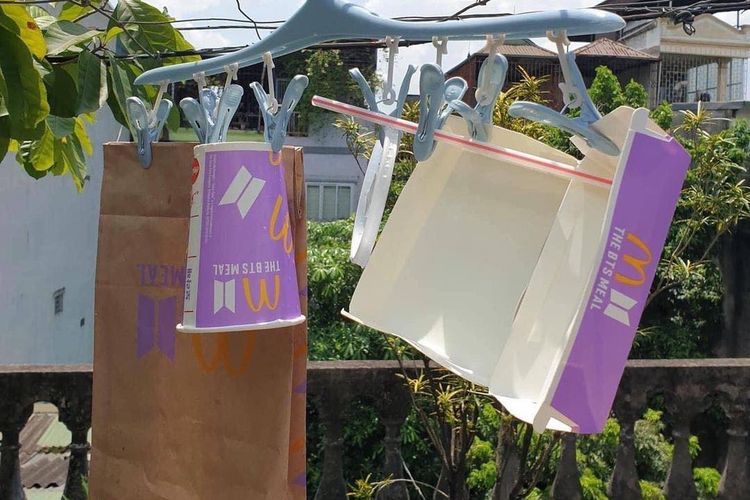 JAKARTA, KOMPAS.com - The fast-food packaging of BTS McDonald's Meal is in high demand and people are reselling its paper bags, boxes, and cups on e-commerce. In Indonesia, the packaging sells on marketplaces for up to a million rupiahs ($70).

The power of fans of the K-pop BTS group, which is known as ‘ARMY’, suddenly shocked the world after the BTS and McDonald’s collaborated and launched the BTS meal at McDonald's.

To collect this limited packaging in a bright purple color, the fans were willing to go the extra mile. They did not only queue at McDonald's outlets but also look for the items online.

The BTS meal includes 10-piece Chicken McNuggets, medium fries, and a medium Coke. In Indonesia, the combo sells for 51,000 rupiahs ($3.5). Those who did not have the chance to buy the BTS Meal, searched for its packaging online. Therefore, some take advantage of ARMY's obsession by selling the packaging at high prices.

To attract buyers, some sellers label the sale as a form of supporting charities, while others simply sell it for personal gain.

This rare moment has made the ARMY keep the packaging as their collection. In Malaysia, the BTS fans washed the used BTS Meal packaging to remove oil stains. Then they line dry the packaging like clothes.

Hypebeast reported that some fans placed the packaging in a glass frame for photos or paintings. The photos of what they've done can be seen in the Penang My Hometown Facebook account. Other fans brought their own containers to keep the purple color packaging in good condition.

Some comments were posted on social media, praising the good work of the McDonald's staffer. A Twitter user which is known as @bananaseok_ilov was grateful that the paper bags used for the meal were still clean.

Alhamdulillah my foods arrived!!! They separate the b bag so it wont be oilly????????. Have a nice day mcd crew here. I love you #BTSMeal pic.twitter.com/Rg95G8T2FN

In Indonesia, McDonald's outlets started to sell the BTS Meal on June 9. This will continue till the end of the month.