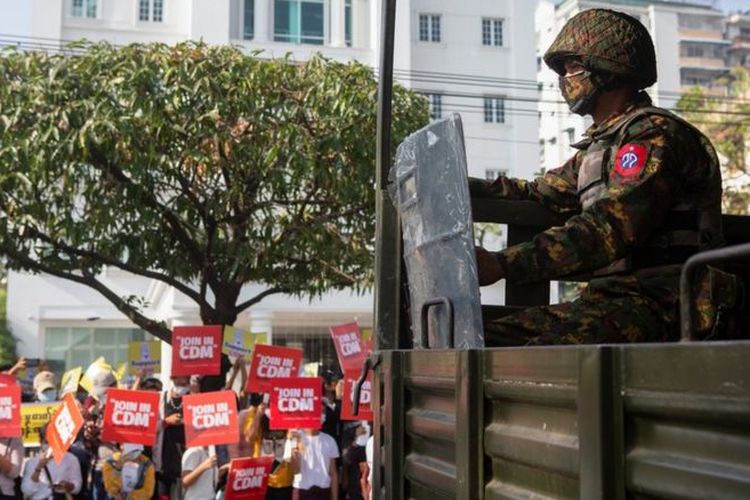 Lihat Foto
Civilian protesters hold up Join in (the) CDM (Civil Disobedience Movement) banners in front of a soldier in Yangon, Myanmar(REUTERS via BBC INDONESIA)

JAKARTA, KOMPAS.com – Philippine President Rodrigo Duterte and Thailand’s Prime Minister Prayuth Chan-o-cha have announced that they will not attend the ASEAN summit in Jakarta which will be convened on Saturday, April 24.

The Philippine government said Foreign Minister Teodoro Locsin Jr. will represent Duterte at the meeting, citing “pressing domestic concerns,” over a surge of Covid-19 cases in the country.

The Philippine Foreign Ministry assured that Duterte’s absence will not detract from the country’s support for the summit, which was convened to touch on the crisis in Myanmar.

Thailand also confirmed that Prime Minister Prayuth will not attend the ASEAN summit. The Thai government said he will be represented by Deputy Prime Minister Don Pramudwinai, who is also the country’s Foreign Minister.

Meanwhile, Chinese Foreign Minister Wang Yi "expects the [ASEAN] meeting to lead to a good start towards helping realise a 'soft landing' for the Myanmar situation," said the senior diplomat, as quoted by the Reuters news agency.

Wang hoped ASEAN can resolve the Myanmar crisis, and warned that failure to do so could bring about grim consequences. "Inappropriate intervention from outside the [Southeast Asia] should be avoided,” he asserted.

"[Previous cases] has proved that blindly exerting strong pressure by foreign forces will not help resolve a country's internal problems, but will bring turbulence or even deterioration to the situation, which will affect and destabilise the region."

China is not an ASEAN member, but a member of the ASEAN Plus Three organization, along with Japan and South Korea. The country, which is a known backer of Myanmar’s military junta, has yet to confirm whether it will attend the ASEAN Summit on Myanmar in Jakarta.

The head of Myanmar’s military junta, General Min Aung Hlaing, has confirmed last Wednesday that he will attend the ASEAN summit.

ASEAN has been hampered from…