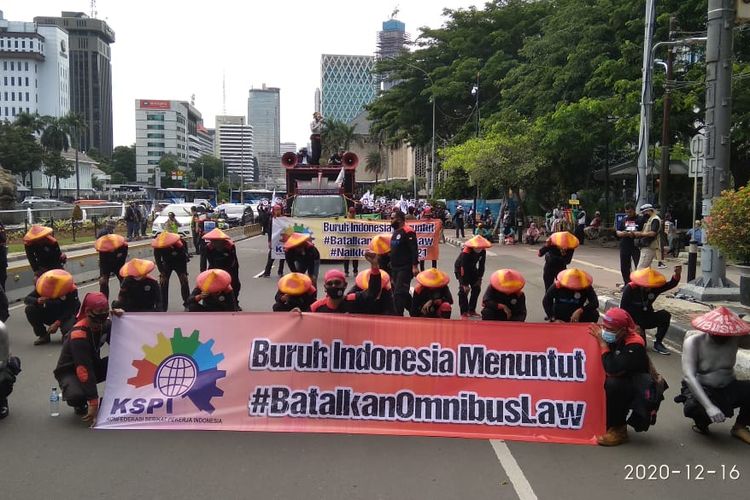 Dokumentasi KSPIWorkers under the Confederation of Indonesian Trade Unions (KSPI) stage a protest in front of the Constitutional Court building in Jakarta on Wednesday, December 12, 2020.

JAKARTA, KOMPAS.com – Thousands of workers under the Confederation of Indonesian Trade Unions (KSPI) and its affiliations will take to the streets of Indonesian cities protesting against the newly-established Job Creation Law.

KSPI head Said Iqbal told a virtual press conference on Monday, April 19 that the protests will take place on April 21 and May 1.

The workers will urge the Constitutional Court judges to revoke the Omnibus Law on Job Creation No. 11/2020 following their request for a judicial review in November last year.

The protest will take place in several places, such as the Constitutional Court building in the capital and the offices of local governments. The protesters will strictly follow the health protocols such as wearing masks, using hand sanitizers, maintaining physical distance, and taking rapid antigen tests.

Meanwhile, the protest on May 1 will gather 50,000 workers from 3,000 factories in 24 provinces. The protest was initiated by KSPI together with other groups comprising teachers, honorary teaching staff, and workers in the tourism sector.

The workers will stage the protests across 200 regencies or cities, he added.
Besides, the workers will also urge the implementation of sectoral minimum wage in each district or city this year.

Previously, the government has stressed the importance of the Job Creation Law which can spur investment and boost labor market competitiveness. The law was also well-received by foreign investors.