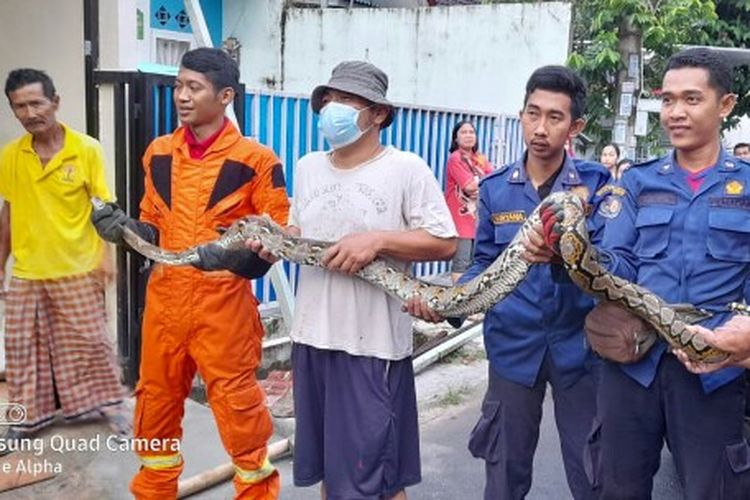 SOUTH TANGERANG, KOMPAS.com - A resident of the Villa Mutiara Housing complex in the city of South Tangerang, Banten province, started his day on the wrong foot, after he spotted a snake near the shed of his house in the early hours of Saturday, April 10.

"The anonymous homeowner came face to face with the reptile when he was bringing out his motorcycle," said Darussalam, the commander of the Alpha Rescue Team of South Tangerang's Fire and Rescue Agency that raced to the scene and captured the snake.

"He found the snake, which we identified as a three meter reticulated python, coiled at his house's terrace near the shed. We assumed the snake is a wild specimen, as there are rivers near the housing complex."

He added that the "the python regurgitated its recently eaten food before we caught it, which is typical behavior when it tried to escape. It showed no aggression towards us."

He added that Fire and Rescue Agency officers searched the housing complex for other snakes and came up empty handed. "Likely the python might have been looking for food in the warehouse, then got trapped."

Darussalam guessed that the reptile entered residential areas because of habitat loss.

The python has now been evacuated and taken to the agency office before it will be handed over to the reptile lovers community.

The reticulated python is the largest snake endemic to Asia, and make its habitat near rainforests, woodlands, and grasslands. This non-venomous species has scales in the shape of irregular diamonds, flanked by smaller markings with light centers.

Herpetologists suggested that one stay…