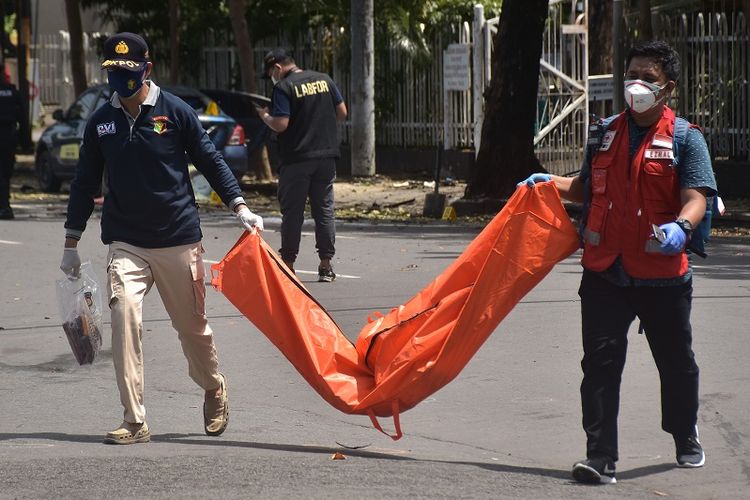 Lihat Foto
Police investigators carry a body bag containing the remains of two suicide bombers who carried out an attack on Makassar Cathedral during a Palm Sunday Mass on Sunday morning (28/3/2021). The two attackers were the only fatalities in the attack, which also wounded 20 members of the church congregation as well as the cathedral's security guards. ANTARA FOTO/Indra Abriyanto/AP/wsj.(ANTARA FOTO/Indra Arbiyanto) VATICAN CITY, KOMPAS.com – The international community has condemned the suicide bombing of a Catholic Cathedral in the Indonesian city of Makassar during a Palm Sunday service last weekend, which killed two suspected bombers and wounded 20 congregants and security guards.

Pope Francis highlighted the incident as he started off Holy Week ceremonies at Vatican City.

“Let us pray for all the victims of violence, especially those of this morning’s attack in Indonesia, in front of the [Sacred Heart of Jesus] Cathedral of Makassar,” the Catholic News Agency quoted the pope as saying on his Palm Sunday Mass at St. Peter’s Basilica on March 28.

At Angelus after celebrating Mass this morning on Palm Sunday, Pope Francis prays for the victims of this morning's Islamist terrorist attack on the Cathedral of the Sacred Heart of Jesus, Makassar, Indonesia, which occurred whilst Palm Sunday Mass was being celebrated. pic.twitter.com/j1h4HWPYUD

“May the Madonna who always precedes us on the path of faith help us.”

Singapore is just as strident in condemning the attack. “Nothing can justify such violence against innocent civilians and places of worship,” the Singaporean Ministry of Foreign Affairs said in its website.

“We wish those who were injured a speedy and full recovery, and support the Indonesian government’s efforts to ensure public safety.”

Turkey the toll terrorism took on the nation as it conveyed its condolences over the bombing in Makassar, the capital of the Indonesian province of South Sulawesi.

“As a country which fought against terrorism for many years and lost a large number of citizens under terrorist attacks, we strongly condemn [the bombing in Makassar],” the Turkish Foreign Ministry said, as quoted in the Daily Sabah media website. COLLECTIE TROPENMUSEUM A photo of Makassar Cathedral circa 1900 -1919

The ministry added that it wished “a speedy recovery to the victims, and “expressed solidarity with the people and Government of Indonesia.” The Hashemite Kingdom of Jordan also condemned the bombing as “a cowardly act” that runs counter to humanity, and “threatens Indonesia’s stability.”

Indonesian National Police chief General Listyo Sigit Prabowo said the bombers, who were identified as L and YSF, were members of a Jemaah Ansharut Daulah [JAD] cell in South Sulawesi.

He noted that the suspects were affiliated with militants behind a a suicide bombing in the Philippines’ Jolo island in 2018.