Lihat Foto
The catch at the Biak Fish Market(Silvita Agmasari) 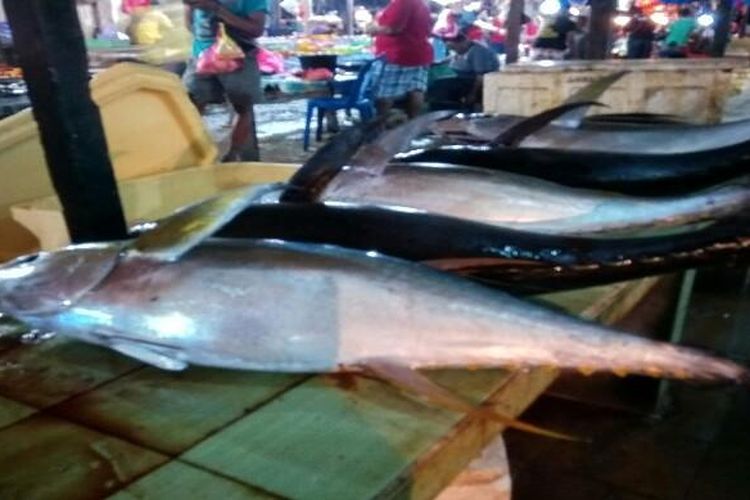 JAKARTA, KOMPAS.com – Indonesia is set to develop its fisheries with a little help from Japan, as the Japan International Cooperation Agency [JICA] gave the Indonesian Ministry of Maritime Affairs and Fisheries or KKP a ¥5.5 billion or Rp. 704 billion [$50,263,417.60] grant to develop the sector.

The KKP and JICA inked the deal, which provided for Phase 2 of a Grant Agreement for The Programme For The Development of Fisheries Sector in Outer Islands.

“The KKP will use the grant to build six Integrated Marine and Fisheries Centers [SKPT] in Indonesia’s outermost islands. The recipients are determined by the Japanese government,” said KKP Secretary General Antam Novambar in a press conference on Tuesday, February 2.

“The islands are Natuna, Morotai, Sabang, Saumlaki, Moa and Biak. These outermost islands are chosen so as to have a more equitable development, develop the economy of the said islands, and use the fisheries sector to further their industrial potential.”

He added that the KKP will still manage the SKPTs in the islands, even as the Japanese government determined their locales. Antam added that the grant is the first of its kind to be given to the KKP. “This grant is direct and non-binding. It does not have to be paid back by instalments or add to debt,” he asserted. “We hope to complete the development of the six SKPTs by 2024.”

JICA representative Ogawa Shigenori reiterated Antam. “We hope that [KKP] will use the funds from the grant wisely. These include using the funds to improve the capacity of the harbor facilities that are meant to be developed.”

Ogawa added that the JICA will also provide logistical support for the initiative. “The support will be in the form of training and seminars, as was agreed last year,” he asserted.

“We hope that the grant…