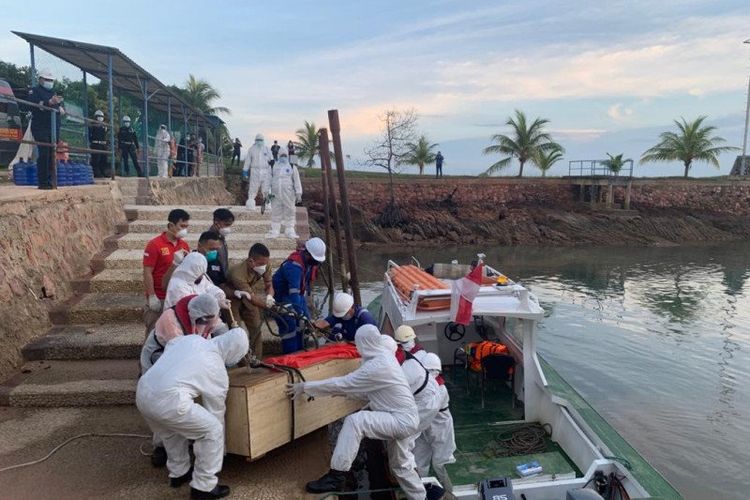 Lihat Foto
Indonesia?s Foreign Affairs Ministry has coordinated the repatriation of six Indonesian crewmen, including a dead body aboard the Chinese fishing vessel. ()

JAKARTA, KOMPAS.com – Indonesia’s Foreign Affairs Ministry has coordinated the repatriation of six Indonesian crewmen, including a dead body aboard the Chinese fishing vessel from the Middle East.

A statement from the ministry said on Thursday, December 31 that the six sailors had returned home aboard a vessel called Hai Ji Li and arrived in Batam, Riau Island on Wednesday, December 30.

“The Foreign Affairs Ministry has established intensive communication with the Chinese government through the diplomatic missions of both countries in Jakarta, Beijing, and Guangzhou to directly repatriate the crewmen to Indonesia by sea,” the statement said.
This marked the second time crew members have been repatriated to Indonesia this year following the good coordination between officials of both countries.

“The cooperation [between both countries] also includes the protection of the rights of workers and ensuring the implementation of laws and regulations [in the field of manpower] through mutual legal assistance,” it added.

The six Indonesian crew members who had been repatriated to Indonesia were detained on the ships for months and were unable to return to Indonesia due to the current pandemic.

The ministry said that they were stranded for months on waters because many countries had banned the entry of foreigners following border closings and travel restrictions.

“Many countries have closed their seaports and do not allow the process of changing crew and reducing foreign crew members,” the statement said.

The sailors worked on three different vessels. Two of them worked on Han Rong 369, three others on Han Rong 361. Meanwhile, the sailor who allegedly died of illness in mid-November 2020 was registered as an employee of the Han Rong 365 ship.

Upon arrival in Batam port, the five crewmen took a polymerase chain reaction (PCR) test for Covid-19 followed by five-day quarantine, while the body of the Indonesian sailor would be autopsied before being handed over to the family.