Lihat Foto
The Indonesian Foreign Minister Retno Marsudi (right) and her US counterpart Mike Pompeo (left) pose for a photo while making hand gestures during their meeting in Jakarta on Thursday, October 29, 2020.(Kemlu) 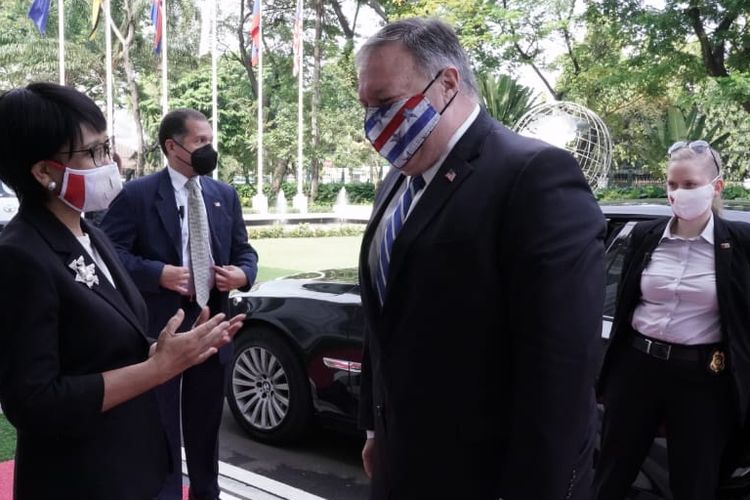 “I invite US companies to locate more projects in Indonesia, including in Natuna Island in the outer islands of Indonesia,” Minister Retno said during a virtual joint statement with her US counterpart Mike Pompeo on Thursday, October 29 in Jakarta.

During their meeting, Retno said the governments of both nations agreed to enhance economic cooperation in a bid to increase global supply chains and accelerate economic recovery.

Besides, both ministers also agreed to promote cooperation in the healthcare sector. Indonesia, she added, expressed appreciation to the US government for its assistance in the time of the Covid-19 pandemic. This included 1,000 ventilators for treating coronavirus patients in Indonesia. “I also emphasize on the importance of building national and regional healthcare resilient, in which the US can play its significant role in supporting the efforts,” Retno said.

Meanwhile, US Secretary of State Pompeo said that the US has rejected China’s claim to the territorial dispute in the South China Sea.

“Our law-abiding nations reject the unlawful claims by the Chinese Communist Party in the South China Sea,” Pompeo told the virtual press conference.

Pompeo lauded Indonesia’s courageous leadership on the sea row issue within ASEAN and the United Nations. “It’s a cause worth pursuing in multilateral settings and the Trump administration very much supports this.”

Pompeo also gave an example of Indonesia’s efforts to protect its maritime sovereignty in the North Natuna Sea. The US government looks forward to working with Indonesia in ensuring the security of one of the busiest trade routes, Pompeo added.

The US Secretary of State arrived in Jakarta in the early hours of Thursday. The visit is part of his five-day international swing through Asian countries including India, Sri Lanka, the Maldives, and Vietnam.