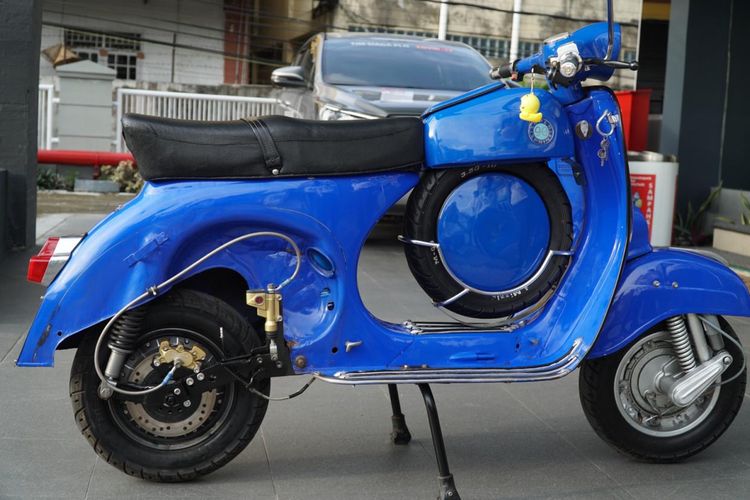 PANGKALPINANG, KOMPAS.com – Pangkalpinang resident Yanuar was all smiles, as he turned the ignition on his blue vintage 1982 Vespa scooter. At a glance, he looks like the scooter aficionado that he is indulging in his passion.

"Vespas [in Pangkalpinang] have always been popular vehicles for years,” he said. “Nowadays they remain antique set of wheels that retain a large following.”

Yet there is more to this mundane scene than it looks. Yanuar is one of a number of automotive buffs working with the Bangka-Belitung provincial branch of the PLN state electric company in modifying the scooter and other vehicles to switch from gasoline to electricity.

“It has enough power to go for a distance of 60 kilometers, even if we take two people on sloping surfaces, such as the famously steep hills of West Bangka which were our testing grounds.”

“Originally, the scooter would need 3 liters of fuel worth Rp. 20,000 [$1.37] for the same distance and load. [The electric powered] Vespa is not only more fuel and cost efficient [than the original], it is also lighter and just as comfortable and has the same top speed of 70 kilometers an hour.”

Made to mark National Electricity Day on October 27, the Vespa is surprisingly easy to operate. The driver has to turn on the MCB switch under the scooter’s seat, then turn on the ignition and speed the scooter off.

But the innovativeness of the vehicle lies in its silence. The lack of a fuel-guzzling engine means there is no revving from the muffler, making for a riding experience like the wind. PLN said that the team accepts modifications from motorcyclists wishing for a clean energy, fuel-efficient ride.

Whether this sustainable modification would…