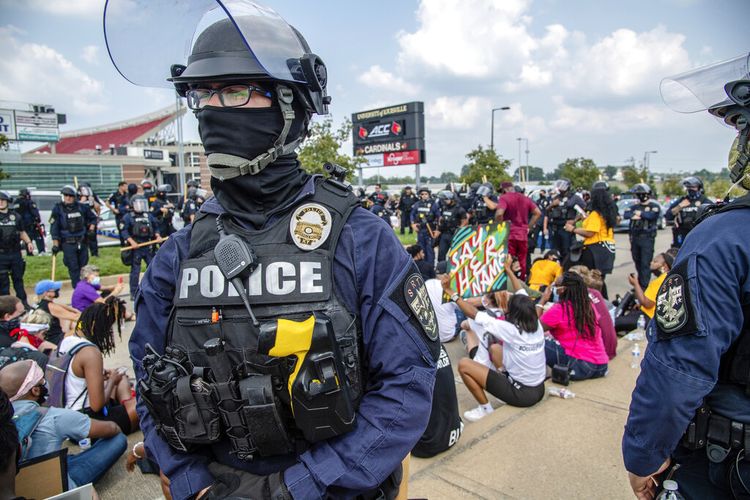 Taylor’s death is under investigation by the FBI and Kentucky Attorney General Daniel Cameron, who is expected to announce in the coming weeks whether criminal charges will be brought against the officers.

Authorities have said the officers fired back after Taylor's boyfriend started shooting at them.

In an emotional speech after Monday's announcement, Gentry addressed residents of the West End neighborhood who have been at the heart of more than 100 days of protest over racial injustice since Taylor's death.

“I’m not here just to help you unboard your beautiful buildings downtown,” she said.

“I’m here to work with you to unboard the community that I served with all my heart in west Louisville, that was boarded for 20 or 30 years.”

She said the past four months have been tough on police officers as well as on protesters, adding that it’s tough “seeing things just feel so hopeless”.

“I will just say: That is just a glimpse of how a lot of people have been feeling for a long time, and we can’t go back,” Gentry said.

Gentry told the newspaper in an interview that she doesn’t want to be the permanent police chief — and didn’t apply for the position.

“When you live in Louisville, and you raise your kids here, like I do, and your family’s here, I want that chief to be successful,” said Gentry, a Louisville native.

“So, even though I wasn’t interested in the full-time job, I realized that somebody has to stand in the gap.”

Fischer is expected to name a new leader by the end of 2020.

In an interview, Gentry acknowledged that improving community relations, reducing crime and boosting officer morale simultaneously won’t be an easy task, but said she's in as “good a position as anyone could be”.

“Being a Black woman, and a veteran and a former police officer, when you’ve worn all the hats of people who are out here, wanting to be heard, and you’ve worked in a place where you’ve tried to be heard and didn’t necessarily feel like you were, I just feel like I have that type of experience that I can bring in there,” Gentry said.

“People are just so far apart. And maybe, I can be in the middle and I can bridge it."