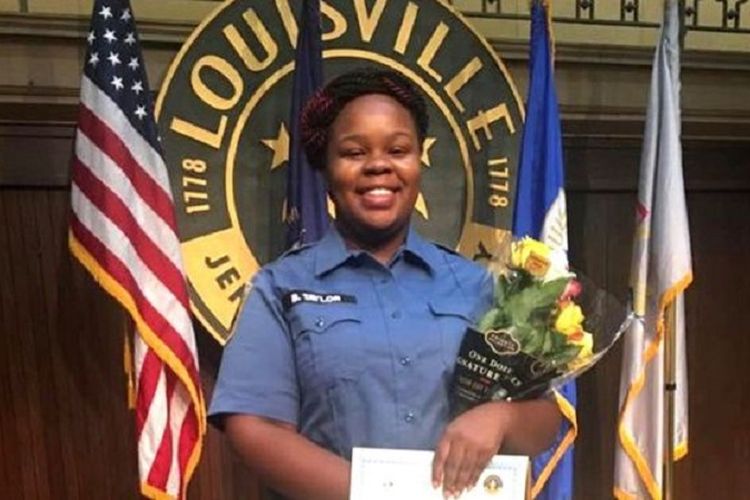 Facebook via BBCA group of white senior citizens staged a sit-in outside the home of Kentucky?s AG Daniel Cameron to demand justice for Breonna Taylor on Thursday.

LOUISVILLE, KOMPAS.com - A group of white senior citizens staged a sit-in outside the home of Kentucky’s AG Daniel Cameron to demand justice for Breonna Taylor on Thursday.

The case of Breonna Taylor, who was shot multiple times by police officers and later died, has garnered nationwide attention including those from Lebron James and Oprah.

Police ended up arresting one of the senior citizens while six others were handed citations.

Over a dozen protestors showed up on the front lawn of Kentucky’s Attorney General, Daniel Cameron’s suburban Louisville home.

They sat in chairs they brought and held up signs that included: “Grannies for Breonna," and “Listen to Your Elders, Black Lives Matter," said 78-year-old protester Dotti Lockhart.

“We can’t march," Lockhart said in a phone interview.

“We all wanted to be involved in some kind of action for Breonna Taylor’s family. ... I thought that a direct action and a little civil disobedience would be something we could risk.”

Mary Carrigan Holden, who spent her time during the sit-in mending a dress, was arrested and charged with criminal trespass at the end of the approximately hourlong protest.

The 68-year-old retired teacher later said it was worth getting arrested because Louisville needs “to wake up and make sure we’re on the right side of history”.

Cameron is leading the investigation…