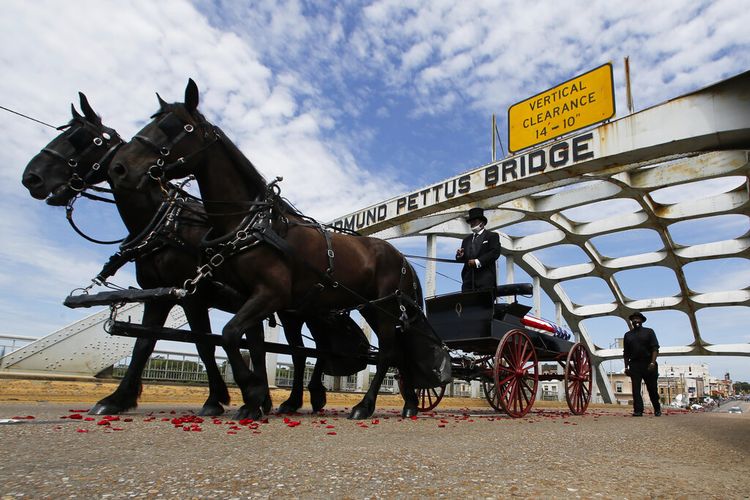 Lihat Foto
A lone caisson drawn by two black horses carried the body of leading figure of the US civil rights movement, John Lewis, across the Edmund Pettus Bridge on Sunday.(John Bazemore)

SELMA, KOMPAS.com – A lone caisson drawn by two black horses carried the body of leading figure of the US civil rights movement, John Lewis, across the Edmund Pettus Bridge on Sunday.

The immensely symbolic tribute across the Alabama bridge was the site where a policeman fractured John’s skull in 1965.

John Lewis had participated in a protest that would help forge his reputation as a fearless civil rights leader in the US. He died on July 18 at the age of 80.

The procession across the Edmund Pettus Bridge in Selma happened on the second of six days of solemn commemorations for the respected rights activist.

The event timing came a year when the “Black Lives Matter” protests against police brutality sent thousands onto US streets further highlighting the raw-depths of America’s racial history.

The procession on a warm and sunny Sunday morning was saluted by a line of Alabama state troopers — a starkly different reception from what Lewis received in the March 7, 1965 march in Selma, when a trooper beat the then-25-year-old to the ground with a nightstick, nearly killing him.

That day's march, later dubbed "Bloody Sunday," was considered a turning point in the rights movement.

John Lewis, then chairman of…