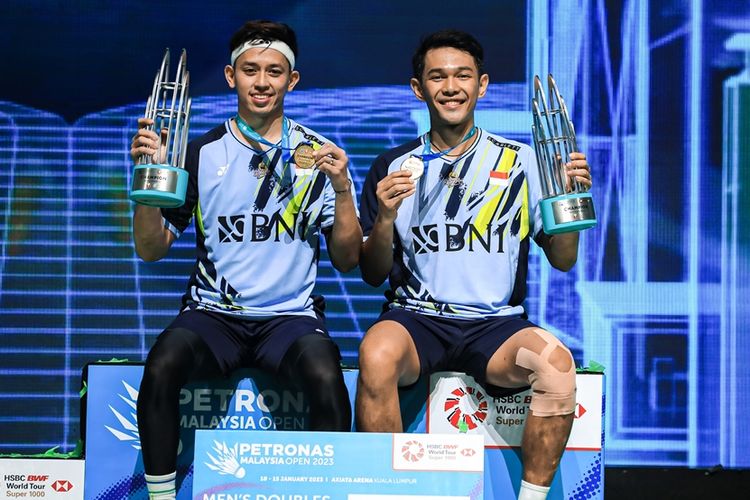 KOMPAS.com – Indonesia’s President Joko “Jokowi” Widodo and the Ministry of Youth and Sports took to Twitter to congratulate Fajar Alfian and Muhammad Rian Ardianto after clinching victory in the Malaysia Open 2023 over the weekend.

“From our homeland, I extend my sincere congratulations to Fajar/Rian, their coaches, and the Indonesian Badminton team, he added.”

Meanwhile, on its Twitter official account, the ministry posted the raising trophy photo followed by a photo resembling a student’s report card featuring the achievements of the duo with their names written as FajRi.

The competition 2023 Malaysia Open title becomes even more special because they won their first Super 1000 title.

“We are happy. Thank God, we won the first Super 1000 at the beginning of 2023. Very grateful and hopefully we will be better in the future,” said Fajar in a statement issued by the Indonesian Badminton Association (PBSI).

“I dedicate this title to Indonesia, PBSI, coaches, all teams, and families. This also goes to all friends and supporters who continue to support us,” Fajar added.

According to the Badminton World…

Indonesia to Begin Ramadan on Sunday
Comments
There are no comments
Comment wisely and responsibly. Comments are entirely the responsibility of the commentator as regulated in the ITE Law
Thank You! We have received your report. We will remove comments that conflict with the Community Guidelines and the ITE Law.