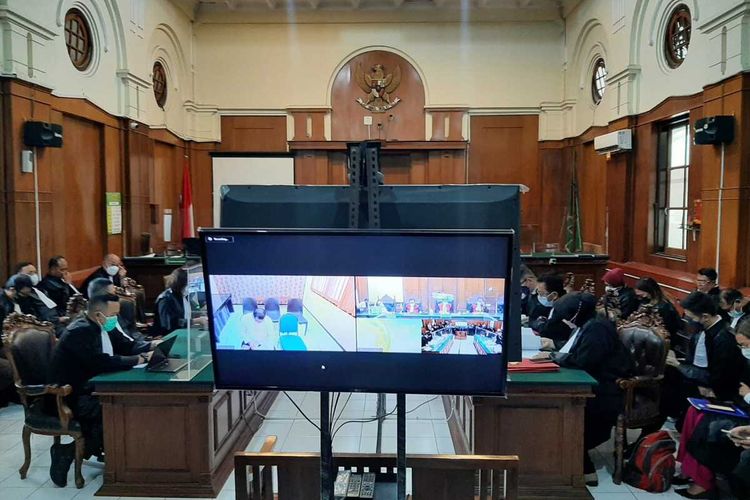 Lihat Foto
The first trial for negligence over the deadly football stampede is held online from an Indonesian court in Surabaya, East Java, Monday, January 16, 2023 due to security concerns. (KOMPAS.COM/ACHMAD FAIZAL)

SURABAYA, KOMPAS.com – Five Indonesian men charged with negligence leading to one of the worst stadium disasters in football history appeared in court by video link on Monday, Jan. 16, as their trial began.

The stampede in October in the East Java city of Malang – which killed 135 people, including more than 40 children -- came after police fired tear gas into packed stands when supporters invaded the pitch at the end of a match between rivals Arema FC and Persebaya Surabaya.

Hundreds of people fled for narrow exits, resulting in a crush that left many trampled or suffocated to death.

Three local police officials, a match organizer and a security official were all charged with negligence for their role in the disaster, and face a maximum sentence of five years imprisonment if found guilty.

A sixth suspect – a former director of the company that runs Indonesia's premier league – remains under police investigation.

On Monday, authorities deployed hundreds of security personnel around the court and the trial was held virtually for security reasons.

Outside the courthouse, Rini Hanifah held up pictures of her son Agus Riansyah, one of the victims who went to watch the football match and never returned. She called for the death penalty for those responsible.

"Lives should be paid with lives. That's not just numbers, it's human lives," she said. "We need justice for my child."

Another parent, Udin, whose daughter and her boyfriend died in the tragedy, said he also wanted those responsible to be heavily punished.

Jokowi, Xi Jinping Scheduled to Witness...
Comments
There are no comments
Comment wisely and responsibly. Comments are entirely the responsibility of the commentator as regulated in the ITE Law
Thank You! We have received your report. We will remove comments that conflict with the Community Guidelines and the ITE Law.