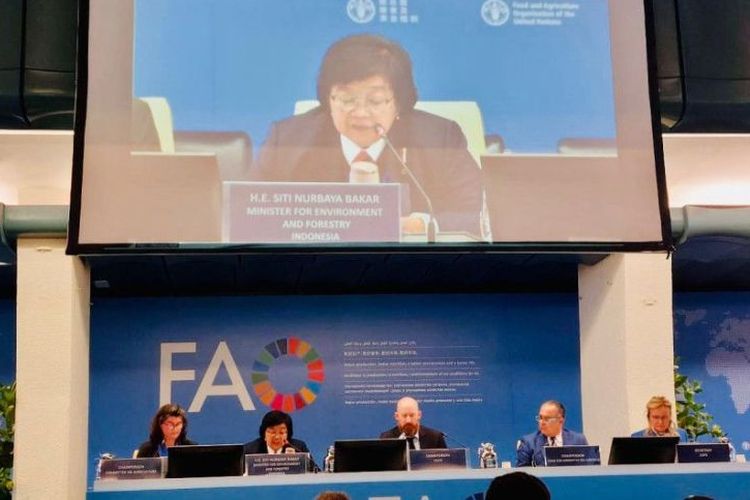 In her statement on Tuesday, Oct. 4, Environment and Forestry Minister Siti Nurbaya Bakar said that the ministry submitted its Long-Term Strategy for Low-Carbon and Climate Resilience 2050 to the United Nations Framework Convention on Climate Change (UNFCCC) Secretariat in July 2022.

"In addition, last week, we delivered Indonesia's Enhanced NDC (nationally determined contributions document), which stated the increase in the country's emission reduction targets from 29 percent to 31.89 percent through the country's own resources and capabilities as well as from 41 percent to 43.20 percent with international support," the minister said.

At the opening of the 26th Session of the Food and Agriculture Organization (FAO) Committee on Forestry (COFO 26) in Rome, Italy, on Monday Oct. 3 local time, she said that the emission reduction envisaged in the forestry and other land use (FOLU) sector is expected to account for nearly 60 percent of the total greenhouse gas emission reduction target.

Besides, Indonesia has made several efforts to manage natural resources and the environment based on scientific research and state interests, Siti said.

"These attempts are integrated into the national greenhouse gas emission reduction program, called Indonesia's Forest and Other Land Use Net Sink 2030, which is formally used as an operational plan for climate action in forestry and other land use sectors," she added.

According to the Ministry’s website, Indonesia’s First NDC document was delivered to the UNFCCC Secretariat in 2016. Later, the ministry submitted Indonesia’s Updated NDC in 2021. Meanwhile, the Enhanced NDC was delivered on Sept. 23, 2022.

The Indonesian government decided to increase the emission reduction target in the Enhanced NDC document since a number of green policies have begun to be implemented, such as the acceleration of the use of electric vehicles as well as the development of B40 fuel, which contains 40 percent biofuel made from palm oil and 60 percent diesel.

The COFO 26 is taking place at the FAO Headquarters in Rome, Italy, from Oct. 3–7.

Twin Giant Panda Cubs Born at...
Comments
There are no comments
Comment wisely and responsibly. Comments are entirely the responsibility of the commentator as regulated in the ITE Law
Thank You! We have received your report. We will remove comments that conflict with the Community Guidelines and the ITE Law.