Lihat Foto
Workers stage a protest in front of the House of Representatives building in Jakarta, Tuesday, September 6, 2022. The rally takes place as anger mounts over the government's hiking of the price of subsidized fuel in Indonesia. (KOMPAS.com/KRISTIANTO PURNOMO) 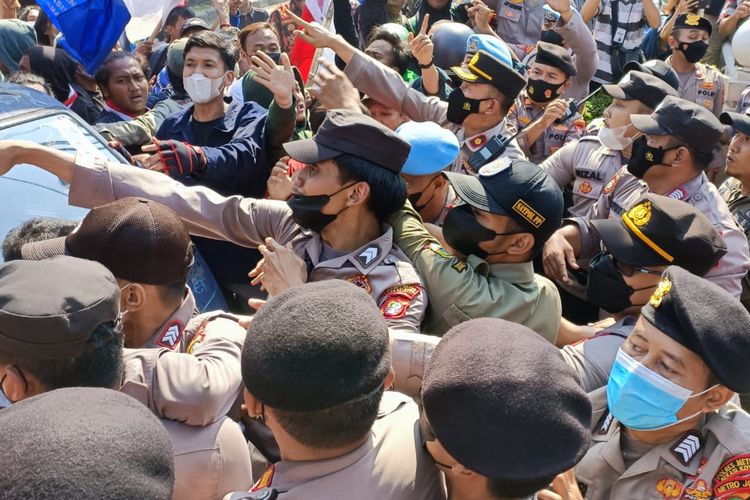 JAKARTA, KOMPAS.com - Thousands of people were expected to join demonstrations across Indonesia on Tuesday, Sept. 6, police and union leaders said, as anger mounts over the government's hiking of the price of subsidized fuel in Southeast Asia's largest economy.

Under pressure to control a ballooning energy subsidy budget, President Joko Widodo on Saturday announced the price of subsidized fuel would be increased by about 30 percent after weeks of speculation of a hike.

Said Iqbal, head of the Indonesian Trade Union Federation, said in a statement late Monday that up to 5,000 people would protest in Jakarta and thousands more elsewhere, to demand the government revoke a decision that has hit workers, farmers, fishermen, and the urban poor the hardest.

Small rallies took place at the weekend and again on Monday, with tires burned and some roads blocked as students and workers vented anger over the decision, which came amid rising food costs and the economy still reeling from the impacts of the pandemic. Endra Zulpan, a Jakarta police spokesperson, on Tuesday said nearly 7,000 officers had been deployed in and around the capital ahead of Tuesday's protests.

The national police chief on Monday instructed regional authorities to maintain calm by increasing efforts to explain to the public why the fuel hike was necessary.

Subsidized fuel is a politically sensitive issue in Indonesia, but the government has worked hard to soften the blow by rolling out a series of compensation measures, including direct cash transfers.

The president on Saturday said the fuel price hike, the first since 2014, was his last option, due to fiscal pressure building.

The move would cut subsidy spending by about 48 trillion rupiahs ($3.22 billion) this year to 650 trillion rupiahs, a deputy finance minister said on Monday, but it would also see inflation accelerate.

Bicycle Price Drops up to 30...
BUSINESS