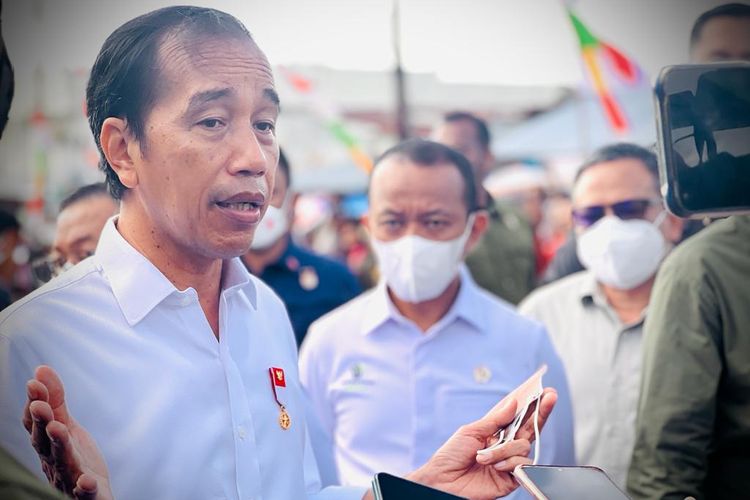 Lihat Foto
Indonesia's President Joko Widodo speaks to journalists on the sidelines of the distribution of social assistance program at the Olilit Market on Tanimbar island in the Maluku province Friday, Sept. 2, 2022. (Dokumentasi/Sekretariat Presiden)

“We continue to push for (the LNG project) in Masela Block. The project was actually ready with Inpex and Shell as operators. However, since the price was low at that time, so one of the investors withdrew, and the project was also delayed,” Jokowi said as quoted by State News Antara on Friday, Sept. 2.

The president made the statement after reviewing the distribution of social assistance at the Olilit Market, Saumlaki, Maluku, according to the Presidential Secretariat YouTube channel.

The Abadi LNG Project is based on an onshore LNG development scheme that the Tokyo-based energy company Inpex Corporation, as the operator, is preparing for development alongside Shell in the Masela Block offshore Indonesia.

However, Shell Upstream Overseas Services Limited, which is a subsidiary of Royal Dutch Shell, withdrew as the operator of the project.

Jokowi said the government has encouraged investors to become the new partner for Inpex Corporation so that the Masela Block project can be started soon.

“The project in the Masela Block will offer an advantage to the Tanimbar Islands in Saumlaki. It will be good for the circulation of money in the region, for GRDP (gross regional domestic product) in the Tanimbar Islands District and Maluku Province. Hence, we will continue to push its operation,” he said.

The Abadi LNG project has been delayed since the withdrawal of the Dutch oil and gas company, Shell Upstream Overseas, in July 2020 despite the project being targeted to start production in 2027.

The project is expected to produce approximately 9.5 million tons of LNG per year and up to approximately 35 thousand barrels of condensate per day. The project will also supply 150 million cubic feet of natural gas per day via pipeline to address the local demand for natural gas.

Before its withdrawal from the Masela Block LNG project, Shell controlled 35 percent of the participating interest (PI) shares while Inpex has the remaining stakes.

Bali to Spearhead Vaccine-Based Tourism Project:...
Comments
There are no comments
Comment wisely and responsibly. Comments are entirely the responsibility of the commentator as regulated in the ITE Law
Thank You! We have received your report. We will remove comments that conflict with the Community Guidelines and the ITE Law.