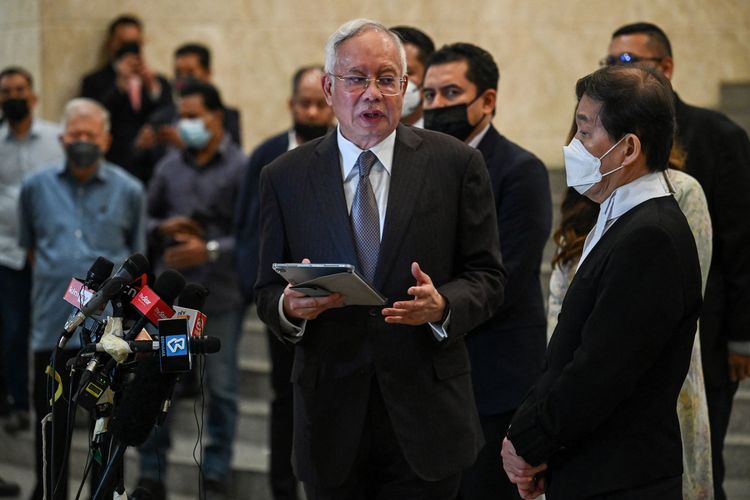 Lihat Foto
Malaysia's former prime minister Najib Razak (C) speaks next to his lawyer Hisyam Teh Poh Teik (R) during a press conference at the federal court in Putrajaya on August 18, 2022. Malaysia's top court on August 18 began hearing ex-leader Najib Razak's appeal to overturn his jail sentence for corruption in a high-stakes legal gambit that can see him either locked up or launch a political comeback. Mohd RASFAN / AFP(Mohd RASFAN/AFP)

If the conviction is upheld, Najib will begin serving his jail sentence immediately, lawyers said.

An acquittal, however, could propel him into contention for his former political post, as he remains popular in Malaysia despite the scandal that plagued his administration.

He remains a lawmaker with the United Malays National Organization (UMNO), the leading party in the current government, and helped its candidates win in recent by-elections.

Some analysts, however, said it may not be an easy comeback for Najib as rivals within his own party may try to derail him.

“Many UMNO leaders privately like to see him checking (into prison) to allow the party a fresh break,” said political scientist Wong Chin Huat of Sunway University, Malaysia.

“With him gone there is one fewer competitor,” added Oh Ei Sun, principal adviser for the think-tank Pacific Research Center of Malaysia.