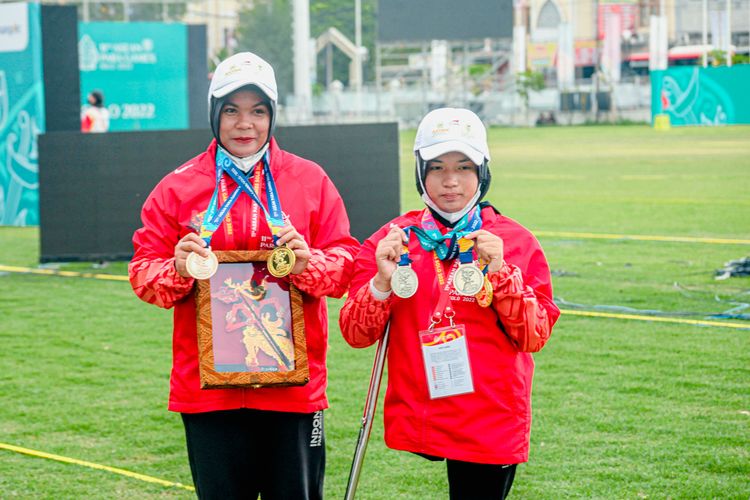 SOLO, KOMPAS.com - The Indonesian para archery contingent topped its gold medal target thanks to the brilliant performance of athletes in the final round of the afternoon session at the ASEAN Para Games (APG) 2022 on Wednesday, Aug. 3.

As of Wednesday, Indonesian archers have collected three golds, two silvers, and two bronzes at the 11th APG in the Indonesian city of Solo, State News Antara said.

“They trained for a long time, but there was no game, so it seemed like an ‘outburst’ today. Tomorrow, there is still one more [match]; hopefully, [win gold]. It’s probably fifty-fifty, but this is already an incredible achievement,” Purwanto remarked.

In Wednesday’s final round at the Kota Barat Field in Solo, Central Java, Mahda Aulia and Wahyu Retno Wulandari clinched the gold medal after defeating Thai pair Phattharaphon Pattawaeo and Tpat Chatyotsakorn in the recurve women’s open doubles, with a score of 34–32, 32–25, and 27–19.

Further, Setiawan and Kholidin bagged gold in the recurve men’s open doubles after defeating Thai pair Hanreuchai Netsiri and Pornchai Phimthong by 33–33, 37–30, and 36–33.

Earlier, in the first session of the match, Setiawan managed to clinch the first gold medal in the recurve men’s single.

Kholidin said that he was elated at winning gold as opponents they faced were quite strong.

“Because Thai players have participated in several Paralympics events, [they have] become world-class. We have just met Thailand [athletes] this time; actually, [we are not] comparable but we believe Indonesia can do it,” he said.

He said that on Thursday, Aug. 4, he would compete again in the final, as there are three more bronze matches left.

Encouraged by the results, he is also targeting to compete in the next Asian Para Games and Paralympics.