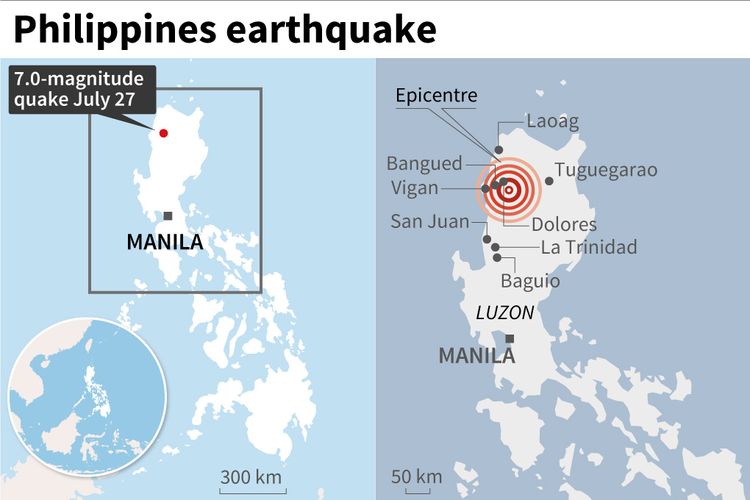 The shallow and powerful quake struck the mountainous and lightly populated province of Abra on the main island of Luzon at 8:43 am local time, the US Geological Survey said.

Shallow earthquakes tend to cause more damage than deeper ones. This one left more than a hundred people injured across the hilly region, triggered dozens of landslides, damaged buildings, and knocked out power.

“We felt really strong shaking. We started shouting and rushed outside,” said university student Mira Zapata in the San Juan municipality of Abra, which took the full force of the quake.

“Our house is OK but houses down the hill were damaged.”

As buildings shook and walls cracked in the municipality of Dolores, people ran outside, Police Major Edwin Sergio told AFP.

“The quake was very strong,” Sergio said, adding that the windows of the local market were broken.

In Bangued, the provincial capital of Abra, a 23-year-old woman was killed after a wall fell on her, police said. At least 78 were injured in the province.

A video posted on Facebook and verified by AFP showed cracks in the asphalt road and ground in Bangued.

“Some of the buildings here…

6.9-Magnitude Quake Strikes Off Western Indonesia
Comments
There are no comments
Comment wisely and responsibly. Comments are entirely the responsibility of the commentator as regulated in the ITE Law
Thank You! We have received your report. We will remove comments that conflict with the Community Guidelines and the ITE Law.