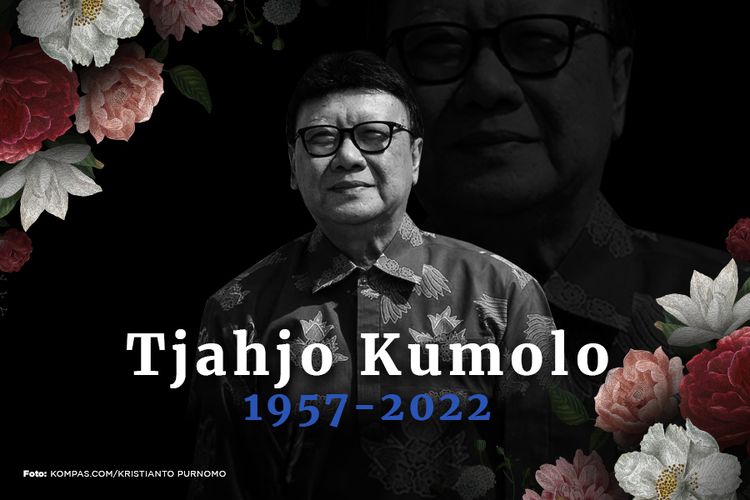 Lihat Foto
Indonesia?s Administrative and Bureaucratic Reform Minister Tjahjo Kumolo passed away on Friday, July 1, 2022 after receiving treatment in a Jakarta hospital for several days. He was 64. (KOMPAS.COM/KRISTIANTO PURNOMO)

JAKARTA, KOMPAS.com – Indonesia’s Administrative and Bureaucratic Reform Minister Tjahjo Kumolo passed away on Friday, July 1, after receiving treatment in a Jakarta hospital for several days. He was 64.

“The information given by the head of BKN [state employment body] was he passed away at 11.10 local time,” Tjahjo’s fellow party politician Junimart Girsang of the Indonesian Democratic Party of Struggle (PDI-P) told to Kompas.com in a text message on Friday.

Tjahjo was admitted to the hospital on June 20. His illness was not known. But, in an interview with Kompas TV, Tjahjo received treatment due to a complication of internal organs.

As he was hospitalized, he was not actively carrying out his daily tasks in the ministry and the party. He did not attend the party’s national working meeting, which started on June 21.

Junimart said the PDI-P is deeply saddened by the death of Tjahjo, who is known as one of the party’s senior members.

He previously served as a member of the House of Representatives for five terms and as the party’s secretary-general before taking up the ministerial post in the cabinet.

“I have known him before he became the secretary-general in the party as I was close to him and often talked with him,” Junimart said.

“He was a figure I wouldn’t forget because he was a senior political figure, a parliamentarian for five terms, and it was very interesting when talking about politics. He was very knowledgeable about civil service employment, an empath, and a humanist.”

The party’s chairperson Megawati Soekarnoputri and President Joko “Jokowi” Widodo had also monitored Tjahjo’s health since he was admitted to the hospital.

Tjahjo was born in Surakarta, Central Java on December 1, 1957. He had been serving as the Administrative and Bureaucratic Reform Minister since October 23, 2019. Before that, he was appointed as Home Affairs Minister from 2014 to 2019 when President Jokowi took office in the first term. Tjahjo also served as a member of the House of Representatives from 1987 to 2014 from Golkar and PDI-P.

Indonesia Passes Criminal Code Banning Sex...
Comments
There are no comments
Comment wisely and responsibly. Comments are entirely the responsibility of the commentator as regulated in the ITE Law
Thank You! We have received your report. We will remove comments that conflict with the Community Guidelines and the ITE Law.