Lihat Foto
A container vessel anchored out past the Pasir Panjang terminal port is seen behind cable car cabins in Singapore on June 17, 2022. (Photo by Roslan RAHMAN / AFP)(ROSLAN RAHMAN) 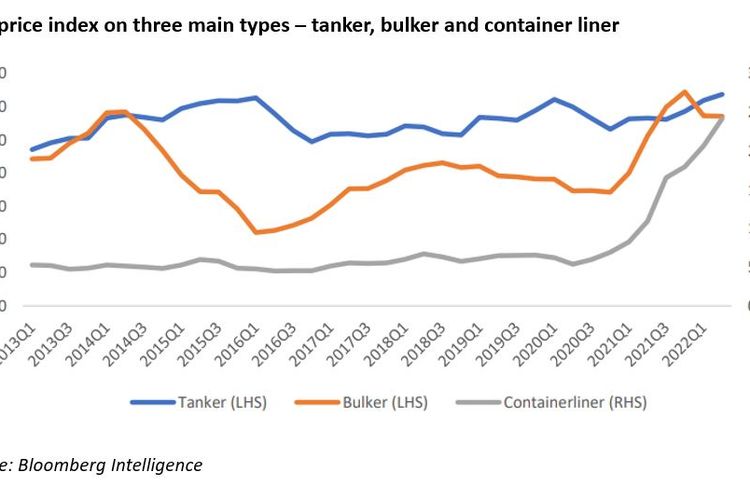 JAKARTA, KOMPAS.com – The disruption of the global supply chain has been an important issue since the Covid-19 pandemic spread all over the world. The recent geopolitical issues between Russia and Ukraine have put yet more pressure on the production capacities which influences the supply of certain commodities.

Both are responsible for creating the bottlenecks of global shipping, especially containerized cargo.

The role of containership is very crucial in global trade. Around 60 percent of all seaborne trade used containers in 2019 with an estimated value of around $14 trillion, the UN Conference for Trade and Development (UNCTAD) said in a report.

The supply chain bottleneck that happens globally has piled up a huge volume of containers in several global ports. Moreover, the shortage of port labor, shipmen, truck driver, and other parts have worsened the capacity chains.

China-North America is the densest trading route in the world based on the UNCTAD database. In 2020, goods worth $457 billion were imported by the United States from China whereas goods worth $136 billion also traveled in the opposite direction.

Bloomberg Intelligence data in April 2022 reported sharp increases in three major global trade routes: Asia-Asia, Asia-North America, and Asia-Europe. From April 2021 to April 2022, the freight rate index increased sharply from 165-145 on the Asia-North America route, 150-25 in intra-Asia trade, and 162-261 on the Asia-Europe route. At the same time, the volume of cargo is steady about 14-15 million Twenty Foot-Equivalent units (TEUs) per month.

The increase in freight rates triggers a further impact on macroeconomic variables such as inflation. The International Monetary Fund (IMF) estimates the impact of transportation costs on inflation based on data from 143 countries over the past 30 years. The results show that when freight rates double, inflation increases by about 0.7 percentage points.

To make things worse, the impact might last up to 18 months. Hence, the implication is quite worrying that if the observed freight rate happens in 2022, we might experience the impact on inflation in 2022.

A report by IFG Progress shows some elasticities in domestic freight rates due to pressure on the oil price. On a particular route connecting the Indonesian cities of Jakarta and Medan, a one percent increase in oil price drives up freight rates by 0.8 percent with a potential lagging impact in the upcoming periods.

The impact of rising shipping costs is not uniform among countries where structural characteristics play an important role. It means that countries with a greater degree of imports and those depending more on transportation such as island countries might experience a higher rate of inflation.

In Indonesia, the increase in logistic costs has been transmitted to overall headline inflation (Consumer Price Index) through import prices such as commodities. Another issue is that domestic fleets shift to the international route leaving the domestic trade left out with fewer fleets that vault up the cost of domestic costs.

For the G20 countries, there are two possible solutions to overcome the bottleneck. First, the skyrocketing freight rates happen because the global merchant containerized cargo is falling under an Oligopoly market structure. The value of the Gini ratio hikes up to 0.7607 in the 2000s vs. 0.5767 in the 1990s.

Consequently, we might witness that the existing incumbent forms alliances that have a strong market power to set and determine the global freight rates, especially by implementing the blank sailing program by reducing the number of operating vessels during the pandemic.

The tit-for-tat strategy has led to an increase in freight rates on major routes globally. For this reason, a price cap might be seen as an appropriate strategy to prevent further pressure on the transportation cost that potentially drives cost-push inflation.

By implementing this proposal, many countries would benefit from solid guidance and certainties for both exporters and importers in estimating their freight costs. Furthermore, we expect more price stability by avoiding unnecessarily price fluctuation due to logistic costs.

The G20 member economies could facilitate the dialogue between the relevant government authorities or agencies and the Main Line Operators (MLOs) in designing and setting these price caps.

On the structural problems, the emerging economies usually have limited power on controlling the exportation of goods and services to the global market. Due to its limited capacity, shipping operators in the emerging economies might have the ability to transport goods from each country towards regional hubs before the cargo is offloaded on the mother vessels onto the destination across the globe.

The capacity of shipping operators in emerging countries is constrained due to the inability to procure vessels associated with vessel price fluctuation.

The global vessel index increased dramatically during the pandemic from about 5000 to nearly 25.000 which indicates the price of container vessels might increase five times compared to the pre-pandemic period. Even so, the exact change varies depending on the size and age of the vessels. 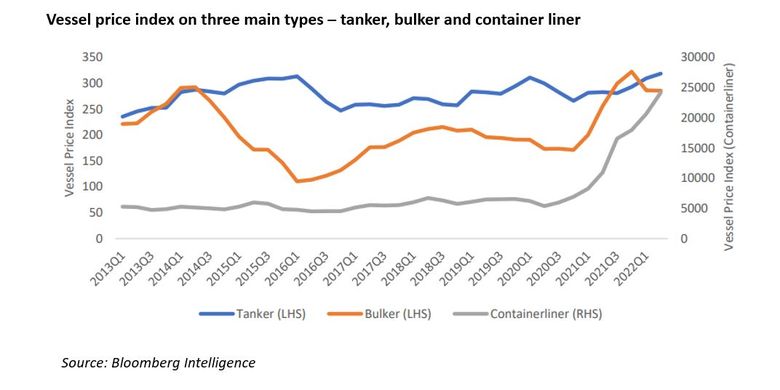 Bloomberg Intelligence Vessel price index on three main types: tanker, bulker, container liner.
The absence of dedicated financial intermediaries in the shipping industries adds to the complexities. This is a loophole where a stronger tie and cooperation between the G20 countries might facilitate the establishment of the global financial institutions that understand the typical risks in the shipping industry hence emerging economies can strengthen their shipping industry reducing the dependency on the global Main Line Operators (MLOs).

Some countries decide to assist the industry by providing private and government bank loans, banks devoted to the shipping industry, or institutions such as Maritime Finance Incentives (MFI), Bank Pembangunan Malaysia Bhd (BPMB), and Merchant Marine.

To spread the risk of vessel price volatility, the government could offer a guarantee to the shipowner for gaining a loan from a commercial bank or subsidy the interest rate by the lenders offered by the government.

Another solution is that syndication between banks to provide lending for the shipowner. These solutions could be a way out to help the small and open economy in the world including Indonesia facing the capacity constrain that entails cascading impacts on transportation costs and inflation.

How MSMEs in Indonesia Are Surviving...
BUSINESS