KOMPAS.com - The factors I analyzed till now couldn’t settle the Greatest of All Time (GOAT) tennis debate. A yardstick for Greatness is the record against formidable opponents.

Roger Federer made opponents seem lesser during his stint as a top player. During this time, few who faced the Swiss master could give him any consistent high-level competition. It will always be debatable whether Federer’s greatness was a factor that reduced the competition to mere mortals or tennis, in general, was weak after the exit of the likes of Pete Sampras, Andre Agassi, and others.

Greatness is not bestowed, greatness is earned by sweat, grit and a never say die approach. Greatness is not just about winning, records, or fan following - it’s the will show in critical moments, how the records were created and how you inspired the next generations.

Longevity is a very impactful factor for greatness. Federer at 39 years, Rafael Nadal at 35, and Novak Djokovic at 34 are all past the median age of Grand Slam champions that is 26 years. The longevity they have maintained is likely to affect the median age and now, tennis does not feel like a game for the raging adrenaline but it has become a very common sight to see the senior craftsmen go head on with the new bulls and actually beat them.

Greatness is intangible, and there will always be arguments. To rate someone as Greatest of All Time, it is imperative that arguments are buried forever.

Hence, the last two factors of the GOAT matrix come into play – impact on the game and adoration of the public and peers. Being perceptions, a subjective analysis will be needed to maintain a balanced view.

As far as the impact of the game of tennis is concerned, there can be no doubt that all three have made such a huge impact in terms of playing style or approach to the game. Whereas Federer brings finesse and grace to the shot execution, Nadal brought the art of topspin baseline artistry and Novak has redefined return of serve and court coverage. Federer’s complex footwork means that he takes more steps than the long-striding Nadal because, to be at the precise position, he actually hops and skips more than anyone would notice.

This brings us to the last of the GOAT matrix factors – adoration by the public and peers. Greatness has to have approval from the masses and overall acceptability by the peers.

Unfortunately, the story of Roger Federer, Rafael Nadal, and Novak Djokovic unravels in the most unforeseen conditions. Rating these three on basis of the spectator support, huddling for autographs or photographs or the commentators’ praise would be an injustice. It is essential to look at mass psychology before making up our minds. 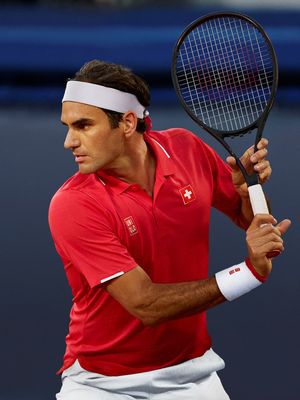 Federer’s entry on the tennis screen came in 2001 when he defeated Sampras in the famous “change of guard” match but we must realize that his entry was at a time when the world of tennis was craving for new heroes, new poster boys, and new faces. The cluster of Grand Slam winners, which had seen 20 different champions sharing 40 trophies in the decade before Federer, had left the fans wondering about the future of the sport. Easing into the frame was very smooth for the long-haired, cutely smiling, and confident Swiss. In fact, his arrival was a rejuvenation for the sport and sports administrations at that time.

Have we ever heard a single voice about Federer like what we hear about players like Novak or Daniil Medvedev, Dominic Thiem, Stefanos Tsitsipas, Alexander Zverev, or even Andy Murray? No, not me at least and by that standard, Federer must have been perfect, but we know there is nothing perfect in this world except for the perceptions that we hold on to.

I too would have loved to continue with my liking for Roger and not write this article, but the problem is the existence of two other men who have made strong claims to greatness and, unfortunately, we cannot ignore them.

This is exactly what happened with the arrival of Nadal on the tennis stage. In Miami 2004, with all fans and past players booting for Federer, Nadal beat the Swiss in their first match. It was waved off as a bad day in the office for the world's No.1 player as it was followed by the match won by Federer in 4 sets again in Miami in 2005 but the semi-final loss in French Open had a significant fraction of the followers take note.

Then came the excuse that Nadal is a clay court specialist and clay is not Federer’s favorite surface. Was it really the right approach to defend our idols but fans did exactly that and by the time Nadal beating Federer became a regular feature, they resigned that the greatness mantle had to be shared among them. Soon, it became easy for all tennis followers to believe that both of them were destined for each other.

Then comes the much-needed villain that makes all love stories immortal. The winner of the 2008 Australian open was treated as just another flash in the pan performance. People liked his funny jokes, antics, and friendly nature. His interviews were also aired and was nicknamed Joker.

The Serb who undoubtedly is the gutsiest of all athletes ever to play any sport had actually turned down UK citizenship to represent the British. Obviously, even before becoming a champion, he had already rubbed many on the wrong side, and starting the 2011 season with a bang by dismantling the established routine of Federer and Nadal victories made things worse. The best thing about him is that he doesn’t seem to care, or at least doesn’t show that he cares much. He hardly has any pressure on his shoulders. As a human being and as a tennis player, he has already established himself to be the greatest personality to play the game, whose empathy and rational approach are commendable and an example to follow for generations to come. He has not only won matches, but he has also won friends, admirers, and millions of hearts.

However, there is one possibility that cannot be ruled out and that can turn the whole debate around on its head. If and I repeat If Roger Federer surprises himself and shocks the world by winning another Grand Slam at the age of 41, he would have stamped himself as the Greatest ever irrespective of the statistics that may follow.

Even Novak with most weeks as Number 1 or year-end number 1’s, Nadal with most Grand Slams, will not matter. Federer’s adverse head-to-head records with his rivals or any other record would not count if he can manage just one more major that could see Roger carve his legacy and beat both contenders to deserve being hailed as the Greatest of All Time. So let’s wait and see how 2022 unfolds.

(Manoj Bhat, founder of SpIns Interactional School Surabaya and tennis spectator, wrote this article. The views expressed in this article belong to the writer).