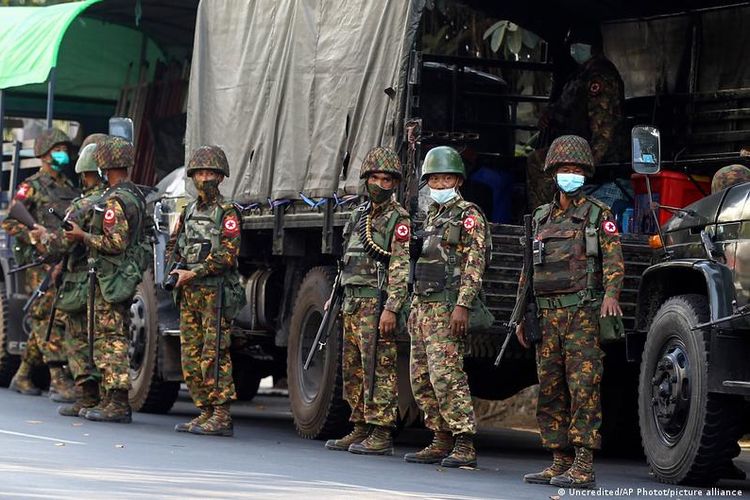 KOMPAS.com - As newly organized "self-defense" groups step up attacks on Myanmar's military, "indiscriminate retaliation" is putting the civil population at risk and displacing thousands of people, the International Crisis Group said in a report released Monday.

Myanmar's military junta, called the Tatmadaw, has violently cracked down on resistance to its rule since seizing power in a coup on February 1.

More than 880 people have been killed in clashes between anti-junta protesters and security forces in cities across Myanmar, according to a local monitoring group.

However, the rise of organized militia groups, which are leading campaigns of armed resistance against the Tatmadaw, could send the country into a protracted downward spiral of violence, the report warns.

What is the connection between civilians and militias?

The report said the Tatmadaw uses a strategy deliberately targeting civilians in a bid to deny insurgents of food, funds, recruits and intelligence on troop movements.

The emergence of new "self-defense" groups to oppose the Tatmadaw has led to "heavy handed" retaliation that has "displaced tens of thousands of men, women and children," it added.

"Faced with armed insurrection, the Tatmadaw can be expected to unleash its military might against civilians," the International Crisis Group said.

Statement by the @UN in Myanmar on recent acts of violence that illustrate a sharp deterioration of the human rights environment across the country.

The UN calls for those responsible for human rights violations to be held accountable.

The report added that new…