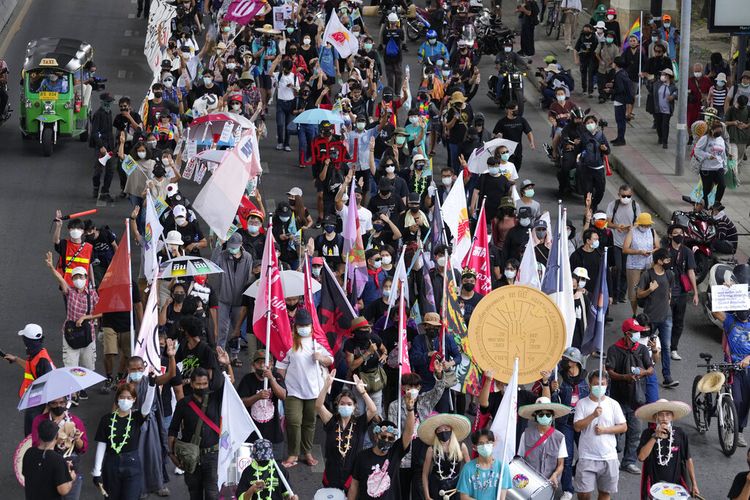 Lihat Foto
Pro-democracy supporters wearing face mask march on the road during a demonstration in Bangkok, Thailand, Thursday, June 24, 2021. Anti-government protests expected to resume in Bangkok after a long break due partly to a surge in Covid-19 cases. Gatherings are planned for several locations across the capital, despite health officials mulling a week-long lockdown in Bangkok to control a rampant virus surge.(AP PHOTO/SAKCHAI LALIT)

KOMPAS.com - For the second time in as many days, anti-government protesters took to the streets of Bangkok demanding the resignation of Prime Minister Prayuth Chan-O-Cha.

Saturday's demonstrations came two days after protesters gathered by the thousands outside parliament and Cabinet offices to mark the 89th anniversary of Thailand’s transition from an absolute monarchy to a constitutional one. Thursday's gatherings were the first anti-government rallies since the Southeast Asian country's most drastic resurgence of Covid-19 infections triggered lockdowns in April.

Hundreds turned out again Saturday in violation of ongoing Covid-19 restrictions to apply more pressure on the government.

“We would like to get a new government to control Thailand. We need to change the constitution first and then we change all the systems. We have to rewrite again," said Witsaruj, 34, who told VOA he regularly participates in the demonstrations. “I think the power of the people [can] make the change. If we have a meaningful vote, then we can restart Thailand. Democracy is the power of the people.”

Protesters have voiced their disapproval of the government’s handling of the pandemic and vaccine rollout. Some were seen carrying signs criticizing the Chinese-made Sinovac as hundreds of police were on standby, barricading roads to government offices.

The rally ended a few minutes past 10 pm local time with no major incident, but Jatuporn called for more rallies with bigger numbers next week.

Kan Sangtong, who works as an observer with Amnesty International Thailand & iLaw as part of a human rights project, told VOA that he expected similar protests.

“I think it will be…