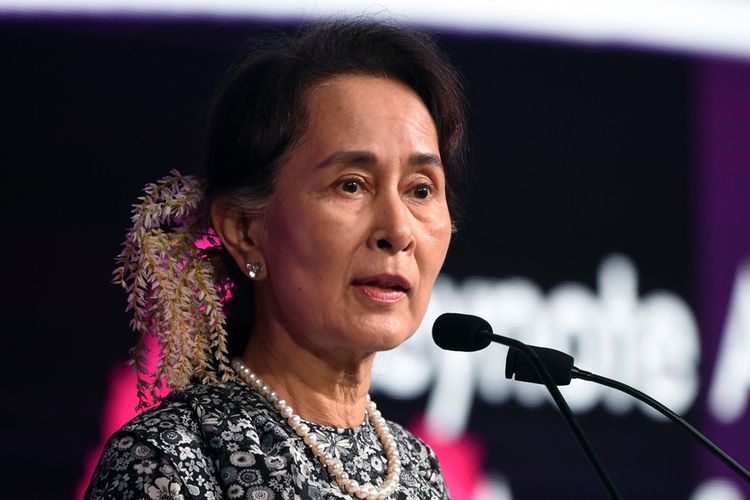 KOMPAS.com - The trial of ousted Myanmar leader Aung San Suu Kyi will hear its first testimony in a junta court Monday, June 14, more than four months after a military coup.

Near daily protests have rocked Myanmar since the generals' putsch removed her government in February, ending a 10-year experiment with democracy.

The mass uprising has been met with a brutal military crackdown that has killed more than 850 people, according to a local monitoring group.

The junta has brought an eclectic raft of charges against the Nobel laureate, from illegally accepting 11 kilograms of gold to breaking a colonial-era secrecy law.

On Monday, her defense team will cross-examine witnesses over charges she improperly imported walkie-talkies and flouted coronavirus restrictions during last year's elections that her National League for Democracy won in a landslide.

Her lawyers -- who have been allowed to meet with her just twice since she was placed under house arrest -- have said they expect the trial to wrap up by July 26.

Hearings for the case will take place every Monday. If convicted of all charges, Suu Kyi, 75, faces more than a decade in jail.

"We are hoping for the best but prepared for the worst," Khin Maung Zaw, one of Suu Kyi's lawyers, told AFP ahead of the hearing in the capital Naypyidaw.

A separate case is scheduled to start on June 15, where she is charged with sedition alongside ousted president Win Myint and another senior member of the NLD.

Myanmar Cities Stage 'Silent Coup' to...
Comments
There are no comments
Comment wisely and responsibly. Comments are entirely the responsibility of the commentator as regulated in the ITE Law
Thank You! We have received your report. We will remove comments that conflict with the Community Guidelines and the ITE Law.