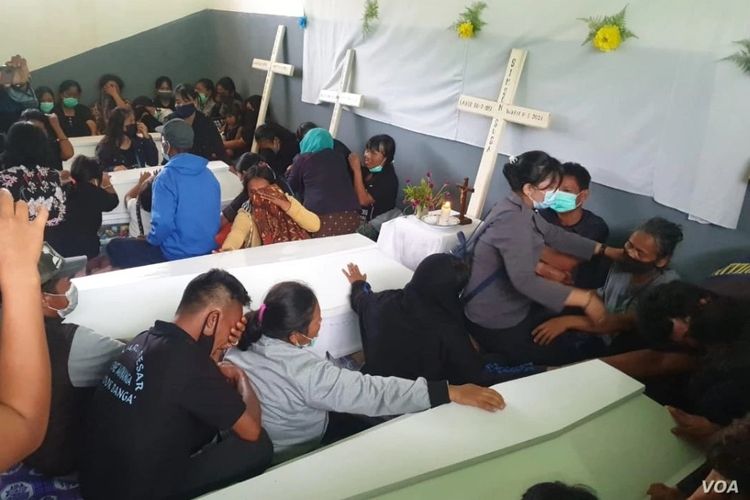 POSO, KOMPAS.com - Hundreds of Christians attended a mass funeral in a remote village of Indonesia’s Central Sulawesi province Wednesday, May 13, to mourn four people killed by militants linked to the Islamic State (IS) group.

Indonesian police told VOA that five militants attacked coffee farmers during harvest Tuesday, May 11, and killed four of them in Kalemago village in the Poso regency.

"These five people, one of whom is recognized by the witness, are in the Wanted List [for their membership] in the East Indonesian Mujahedeen,” said Didik Supranoto, a senior commissioner and spokesperson for Central Sulawesi Regional Police.

The East Indonesian Mujahedeen, also known as Mujahidin Indonesia Timur (MIT), has been active in the mountainous Poso district since 2010. The United Nations, Indonesia, and the United States have labeled MIT a terrorist organization.

The group’s founder, Abu Wardah Santoso, pledged allegiance to IS in 2014.

Indonesian forces killed Santoso during a jungle gunbattle in July 2016. Ali Kalora replaced him to keep MIT active in the Poso district, an area that has been a hotbed for religious conflict for years.

While there are no official data on the number of MIT members, the group is known to operate with a small group of recruited fighters. In 2015, the US State Department described the group as becoming “increasingly bold” in its explosives and shooting attacks against security forces.

Tuesday’s assault prevented the farmers of Kalemago from attending to their coffee and cocoa plantations because of fear of more violence from MIT, according to the village’s secretary, Otniel Papunde.

"Our hope for the government, the president, is to resolve this. If not, we will no longer be able to go out to earn a living,” Papunde told VOA, adding that the remote village, home to 735 people, has been a victim of militant violence for years.

“Frankly, we feel that no one is paying attention to us," said Papunde.