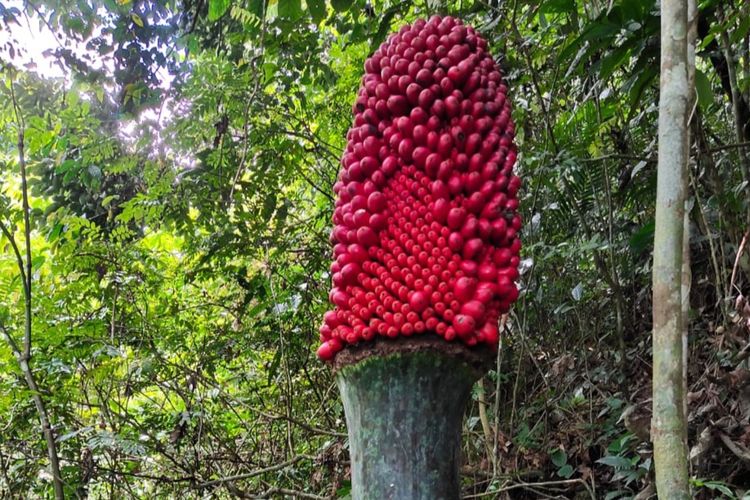 PADANG, KOMPAS.com – The Agam regency of Indonesia’s West Sumatra province is host to a very rare natural phenomenon, after a carrion flower of the Amorphophallus titanium or titan arum strain has borne fruit in the wild.

The Nature Conservation Agency [BKSDA] announced that the occurrence happened at the Tilatang Kamang forest, three kilometers from the nearest human habitation.

"A carrion flower bearing fruits is a very rare phenomenon, so we raced to the scene when local people notified [the BKSDA] of this occurrence,” Nature Conservation Agency [BKSDA] head for the Bukittinggi region Vera Ciko said to Kompas.com on Wednesday, April 14.

She added that the BKSDA requested the local people to safeguard the flower, since the plant is a protected species.

“Usually carrion flowers like the titan arum would wilt and die within ten days, which seemed to be the case as it happened to the petals and leaves of the carrion flower," Ciko asserted about the bright red plants, which grew cylindrically in the flower's cylindrical corner.

While Ciko did not say whether the fruits are edible, she highlighted theories about how the carrion flowers can bring out about the plant. "We believe that the fruits are produced by the flowers’ successful pollination from flesh eating flies and carrion beetles or self-pollination.”

Ciko noted that carrion flowers can last as long as 2.5 months after their bloom and pollination. The Amorphophallus titanium species is endemic to West Sumatra, though it is regularly grown in botanical gardens around the world.

Like the closely related Rafflesia Arnoldii, which is found throughout Sumatra and Kalimantan and the rest of Borneo, the titan arum is infamous for its smell. Observers note that the stench ranges from, among other things, rotting flesh, garlic, to strong Limburger cheese.