YOGYAKARTA, KOMPAS.com -Like millions of their brethren in Indonesia and around the world, the Al-Fatah pesantren or Islamic religious school are preparing to mark the holy Muslim month of Ramadan in April 2021.

While this occasion is marked by the Covid-19 pandemic for the second year in a row, it does not hamper the students and teachers of the pesantren from their devout observation of fasting, prayers and alms as well as good works that are a part of Ramadan.

But the Al-Fatah pesantren's faculty and staff is distinct from other schools of their kind. Unlike the all-male or all-female faculty and student body of other pesantren, the teachers and students are transgenders.

Also read: The Origins of the Gereja Ayam or Chicken Church Prayer House

And while these students would board in the school, the Al-Fatah's students are day students who meet on a weekly basis.

Located among the old buildings and narrow alleyways of Kotagede old village in Yogyakarta's Bantul regency, the pesantren is run in a makeshift manner from a green Javanese house owned by its headmistress Shinta Ratri.

Here, the pesantren's trans students prepare for Ramadan like their peers. As devout Muslims, Al-Fatah's students believe that Ramadan marks the time of year when God revealed the first verses of the Quran to the Prophet Mohammed.

The trans students prepared for Ramadan traditions that are perhaps syncretic in nature. These include nyadran, or sending prayers to trans people who have passed away, as well as padusan, a bath to purify one's soul.

"[We hold the nyadran] to pray for the souls of trans people who died over the years," said Shinta, who led the students in prayer at the pesantren before going to their graves.

"These include those who are either buried in the villages where they live, or buried by local communities and government institutions after their communities of origin refused to take their remains for burial."

KOMPAS.com/MARKUS YUWONO Pesantren Al Fatah founder Shinta Ratri with a plaque from Ireland based NGO Front Line Defenders that commended her for her work on behalf of trans people in Yogyakarta

In contrast, the padusan is a more lighthearted and sociable event. "This Sunday we are going on a picnic in Karanganyar. 40 of our neighbors will join our community for the gathering," asserted Shinta to Kompas.com.

Like the nyadran and padusan, Shinta added that the pesantren's program for Ramadan is the same since it opened in 2008 until religious conservatives forced its closure in 2016, and its reopening at the behest of Yogyakarta's Sultan Hamengku Buwono X in 2019.

"[Pesantren al-Fatah] will hold weekly prayers and classes on deepening one's understanding of Islam twice a week on Sundays and Wednesdays, like we do every Ramadan," she noted.

"40 of our trans students will attend these courses, which start from communal fastbreaking to a group tadarus session, where we recite suras or prayers from the Al-Qur'an." 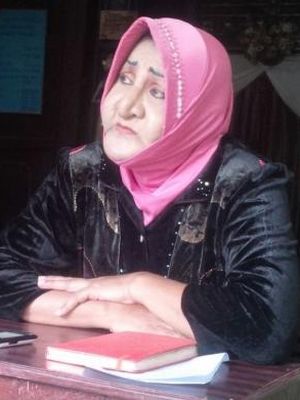 An inclusive event with other faiths

A number of university students who work with the pesantren on field research will also participate as observers, much like their predecessors in previous years.

The Al-Fatah pesantren said it helped foster solidarity among transgender people and other marginalized segments of society in Yogyakarta ever year.

"Yogyakarta's trans population numbered in the hundreds, to say the least," said Shinta, who is a recipient of a human rights award from the Ireland-based NGO Front Line Defenders for her work on behalf of Yogyakarta's transgender community.

"They work in various fields ranging from salons to restaurants. A number might even engage in prostitution."

Of the pesantren's 40 students, at least 10 are known to board at the school. The students are allowed to dress as men or women, depending which gender they identify with.