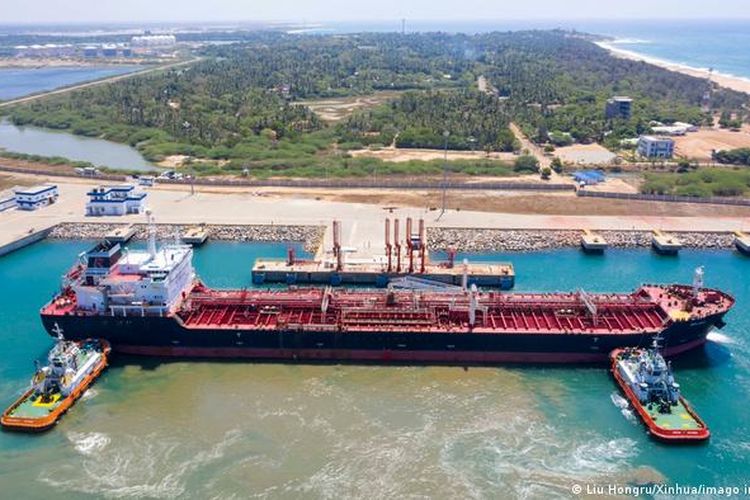 FILE - China Coast Guard ship is seen from an Indonesian Naval ship during a patrol at Indonesia's Exclusive Economic Zone (EEZ) sea in the north of Natuna Island, Indonesia, Jan. 11, 2020

U.S. officials say they sent Navy ships to the South China Sea 10 times last year, adding B-52 bombers at least once, as a way of showing the disputed waterway remains open to international use rather than exclusive Chinese control.

Brunei, Malaysia, the Philippines, Taiwan and Vietnam contest Beijing’s claims to about 90% of the 3.5 million-square-kilometer sea that is prized for natural resources.

China has the strongest armed forces among the six claimants, prompting the others to look toward the United States for support.

The term describes governments that make deals with pharmaceutical companies to treat their own populations at the expense of other countries. China has already sent its Sinovac vaccines to Indonesia and the Philippines.

Washington has offered COVID-19 relief aid to Southeast Asia, including $18.3 million in emergency health and humanitarian assistance in the first quarter of 2020.

But the U.S. government lacks an equivalent of China’s trillion-plus dollar Belt-and-Road Initiative for building transport infrastructure throughout Eurasia through 2027 — including projects in some of the countries that sent ministers last week to see Wang.

“China just needs to deliver on its Belt and Road projects in all these countries and that’s enough to prevent the economies from going under,” said Alan Chong, associate professor at the S. Rajaratnam School of International Studies in Singapore.

“The Chinese market was singularly unharmed” last year, Chong added. Much of the world economy was shaken by anti-pandemic business closures.

Southeast Asian countries will look to China more than to the United States for any help in working with one of their members, Myanmar, after a February coup and violent protests, Chong said.

Officials in Southeast Asia further hope China will reopen to travel, including for students, said Shariman Lockman, senior foreign policy and security studies analyst with the Institute of Strategic and International Studies in Malaysia.

Malaysia and the Philippines probably raised the South China Sea issue with Wang last week “because it’s one of those things that you have to mention,” Lockman said.

“Diplomacy is partly form,” he said. “If you don’t mention it, he will think you don’t care about it and they can get away with things, so you have to say ‘oh, by the way.’”

The Chinese foreign minister for his part probably “soft pedaled” any past actions that make China look like a “great power,” Chong said.