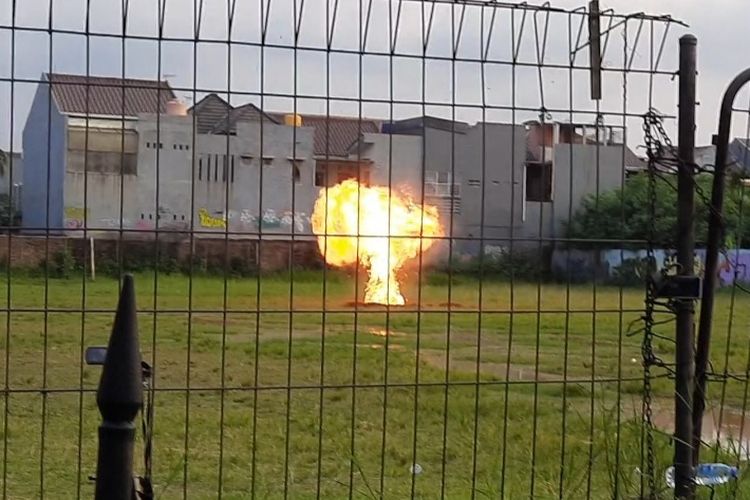 Lihat Foto
The Indonesian Police's bomb disposal teams or Gegana explode a bomb confiscated as evidence during a police raid in Condet, East Jakarta on Monday (29/3/2021). The raid is one of a number of nationwide attacks by the Indonesian Police following a suicide bombing on a Cathedral holding Palm Sunday Mass in Makassar, South Sulawesi(KOMPAS.com/NIRMALA MAULANA ACHMAD) JAKARTA, KOMPAS.com – The Indonesian National Police [Polri] cracked down on the Jamaah Ansharut Daulah [JAD] terrorist cells, after a suspected militant from the terrorist group and his wife launched a suicide attack on a Catholic cathedral in Makassar, South Sulawesi.

The blast, which occurred on Sunday, killed the suicide bombers and injured 20 people.

“The unit confiscated five active, fused bombs that were ready to use as evidence during the operation. They also found four kilograms of explosive materials, including acetone, hydrogen peroxide, sulphur, black [gun]powder in five jars, and a thermometer.”

He added that the suspects planned to use the materials to make detonators and have been given different roles.

“The suspects' tasks included buying [bombmaking] materials, teaching bombmaking, and making the bombs. They also designated one of their members to blow up the bombs.”

Local civilians witnessed the Densus 88. “I saw [that the suspect] resisted arrest as [Densus 88] handcuffed and took him away,” said eyewitness Sri Anita, a Condet resident. “The [terrorist] suspect run a car showroom business that is integrated with their house.”

An eyewitness to the Densus…